Trump disavows "Send her back!" chant (wow) - The Horn News 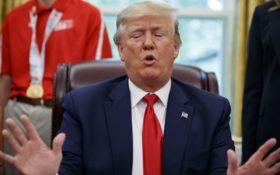 President Donald Trump has chided his supporters who chanted “send her back” when he questioned the loyalty of Somali-born congresswoman Rep. Ilhan Omar, D-M.N.

Trump also claimed he had tried to stop the chant at a reelection event Wednesday night in North Carolina.

“I started speaking really quickly,” he told reporters Thursday. “I was not happy with it. I disagree with it” and “would certainly try” to stop any similar chant at a future rally.

However, the president did not back down from his criticism of Omar and “the Squad” on Thursday.

The taunt’s target, Omar, responded Thursday. She told reporters at the Capitol that she believes the president is a “fascist” and cast the confrontation as a fight over “what this country truly should be.”

Omar was born outside the U.S. but is an American citizen. She came to America legally as a child with her family from Somalia.

In North Carolina, Trump berated each of the four congresswomen and said: “They never have anything good to say. That’s why I say, ‘Hey if you don’t like it, let ‘em leave, let ‘em leave.’” He added, “I think in some cases they hate our country.”