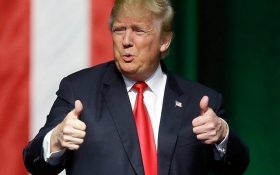 President Donald Trump sent a message to American taxpayers: Relief is on the way.

Trump promised Thursday that an announcement on tax reform is coming in just a few weeks — and it’s going to be BIG.

The government is going to “lower the overall tax burden on American businesses big-league. That’s coming along very well. We’re way ahead of schedule, I believe. We’re going to be announcing something, I would say, over the next two or three weeks,” Trump said.

It’s not just businesses that are going to benefit from the tax break.

The average taxpayer will see a large chunk of their paychecks back in their pockets as well.

“We’re looking at the 1986 tax cuts by President Regan, we’re looking at the realities of today’s economy, the crushing unaffordability of everyday life many American families tell the White House about, and really taking the yoke off the businesses as well.”