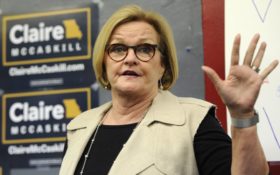 President Donald Trump slammed Democratic U.S. Sen. Claire McCaskill as “phony” in a tweet on Wednesday after she used a private plane during a recent RV road trip through Missouri to visit veterans.

Trump and Republicans piled on McCaskill for taking flights on her husband’s company’s propeller plane during the three-day tour. Trump on Wednesday tweeted “people are really upset, so phony!”

Senator Claire McCaskill of the GREAT State of Missouri flew around in a luxurious private jet during her RV tour of the state. RV’s are not for her. People are really upset, so phony! Josh Hawley should win big, and has my full endorsement.

McCaskill is in a tough re-election race in state that voted overwhelmingly for Trump in 2016, and the outcome could determine party control of the U.S. Senate. She faces a potential showdown with the state’s Republican Attorney General Josh Hawley, who has been endorsed by Trump.

The tour featured #Big Blue, a dark blue recreational vehicle with “Claire McCaskill” emblazoned on the side and a map of Missouri in yellow. Her campaign promoted the tour with several photos of the RV, some with McCaskill standing in front of #Big Blue.

Hawley in a Tuesday tweet challenged McCaskill to give up use of the private plane for the rest of the campaign and “live like the rest of us.”

His campaign manager, Kyle Plotkin, on Wednesday said use of the plane was hypocritical of McCaskill.

This is not the first time McCaskill has faced criticism for flying on private planes.

She sold a private plane she co-owned with her husband in 2011 after her use of it for official business and failure to pay back taxes created a political headache. She repaid the government $88,000 after she was criticized for reimbursing herself for use of the plane on official and political travel. Then she paid an initial $287,000, rising to $320,000 in back taxes, penalties and interest to St. Louis County.

Plotkin on Wednesday said that Hawley has not flown to any campaign stops in Missouri.