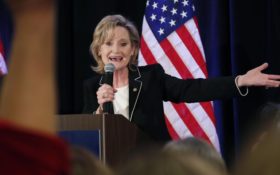 Republican Sen. Cindy Hyde-Smith returns to Washington as a solidly loyal President Donald Trump supporter after the he stumped for her in Mississippi’s contentious special election runoff.

Hyde-Smith defeated Democrat Mike Espy, who was vying to become the state’s first African-American senator since Reconstruction, during Tuesday’s runoff.

The GOP victory  gave Republicans a 53-47 gain in the upper chamber, and gave Hyde-Smith the role of becoming the first woman to ever be elected to Congress from the state.

To secure the win, the GOP pumped resources into Mississippi, and Trump made a strong effort on behalf of Hyde-Smith, holding last-minute rallies in Mississippi on Monday.

Speaking to supporters after her win, Hyde-Smith vowed to fight for everyone in the state when she goes to Washington.

“I want everybody to know, no matter who you voted for today, I’m going to always represent every Mississippian. I will work very hard and do my very best to make Mississippi very proud,” she said. Speaking to reporters later she said Trump had called to congratulate her and said she’d “been through a storm” and “survived it with grace.”

With Hyde-Smith’s victory, Republicans control 53 of the Senate’s 100 seats. The GOP lost control of the House, where Democrats will assume the majority in January.

Democratic opponent Espy, 64, a former U.S. agriculture secretary, addressed his supporters Tuesday night, saying: “While this is not the result we were hoping for, I am proud of the historic campaign we ran and grateful for the support we received across Mississippi. We built the largest grassroots organization our state has seen in a generation.”

Hyde-Smith was in her second term as Mississippi agriculture commissioner when Republican Gov. Phil Bryant appointed her to temporarily succeed GOP Sen. Thad Cochran. The longtime lawmaker retired in April amid health concerns.

Shortly after the win Tuesday, Trump tweeted: “Congratulations to Senator Cindy Hyde-Smith on your big WIN in the Great State of Mississippi. We are all very proud of you!”

Congratulations to Senator Cindy Hyde-Smith on your big WIN in the Great State of Mississippi. We are all very proud of you!

The win makes Hyde-Smith, 59, the first woman elected to Congress from Mississippi.

Hyde-Smith and Espy emerged from a field of four candidates Nov. 6 to advance to Tuesday’s runoff. Her win allows her to complete the final two years of Cochran’s six-year term.