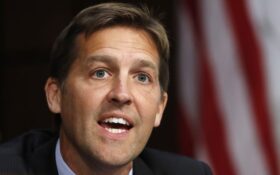 “Under the Constitution, that power belongs to the American people acting through their members of Congress,” he wrote.

Trump, who had endorsed Sasse during his 2020 primary campaign, sent a Tweet in response Monday morning.

RINO Ben Sasse, who needed my support and endorsement in order to get the Republican nomination for Senate from the GREAT State of Nebraska, has, now that he’s got it (Thank you President T), gone rogue, again. This foolishness plays right into the hands of the Radical Left Dems!

This isn’t the first time Sasse and Trump have clashed. Sasse said during the 2016 presidential election that he wouldn’t vote for Trump or then-Democratic presential candidate Hillary Clinton. And since he was elected, he’s broken with the White House a number of times.

However, they’d reportedly worked closely together in the years since, and often speak multiple times a day. Sasse won his primary re-election by 50 points in the spring, and is expected to win re-election easily.

Sasse wasn’t the only lawmaker in D.C. to push back on Trump’s end run around Congress on coronavirus relief.

Liberal lawmakers called it a pre-election ploy that would burden cash-strapped states. Democrats and Republican lawmakers failed to reach a compromise on continuing needed economic relief after weeks of negotiations.

“When you look at those executive orders … the kindest thing I could say is he doesn’t know what he’s talking about or something’s wrong there,” House Speaker Nancy Pelosi said. “To characterize them as even accomplishing what they set out to do, as something that will take the place of an agreement, is just not so.”

After negotiations hit a wall, Trump used what he said were the inherent powers of the presidency to forge ahead on tax and spending policy that Congress says it is granted by the Constitution.

Trump asserted he had the authority to defer payroll taxes and extend an expired unemployment benefit, at a lower amount than what the jobless had been getting during the crisis. The Republican president contended his orders “will take care of pretty much this entire situation, as we know it.”

Though certain to further strain relations with Congress, the moves were framed by the White House as the president breaking through the Washington gridlock in order to directly distribute aid. Advisers hope it will sustain an economic recovery that Trump likely needs to defeat Democratic presidential candidate Joe Biden in November.

Trump took full credit for the measures, which he signed at his New Jersey golf club on Saturday after congressional talks broke down this past week. Democrats initially sought a $3.4 trillion package but said they lowered their demand to $2 trillion. Republicans had proposed a $1 trillion plan.

Trump accused Democrats of trying to spend more than was needed and adding money for priorities unrelated to the pandemic. He said local aid amounted to “bailout money” for states and cities “badly run by Democrats for many years. … And we’re not willing to do that.”

The president wants to continue paying a supplemental federal unemployment benefit for millions of Americans put out of work during the outbreak. But his order called for up to $400 payments each week, reduced from the $600 that people had been receiving weekly. Trump said states would cover 25% of this money even as many are dealing with major budget shortfalls.

As state officials questioned whether they could afford $100 per person per week, Trump offered a new angle to the plan. Speaking to reporters Sunday night as he returned to Washington, he said states could make application to have the federal government provide all or part of the $400 payments. He said decisions would be made on a state-by-state basis.

Trump also acted to defer payment of the payroll tax, a long-pushed goal that had little support from either party on Capitol Hill, and federal student loans. His order on housing is not a guarantee against eviction, but instead directs the departments of the Treasury and Housing and Urban Development to identify money that could help those struggling to pay their monthly rent.

Trump said the employee portion of the payroll tax would be deferred from Aug. 1 through the end of the year, and he raised the possibility of making it permanent, though experts said he lacked that authority. The temporary deferral would not directly aid unemployed workers, who do not pay the tax when they are jobless. Employees would need to repay the federal government eventually without an act of Congress.

The president didn’t say how he would fund Medicare and Social Security benefits that the 7% tax on employee income covers, which Democrats pounced on and said Trump wanted eliminate.

On Sunday night, in the wake of that criticism, Trump told reporters the money would not come from Social Security but from the Treasury if the government didn’t require workers to repay the taxes. To Sasse’s credit, that would require congressional action.

“If the Democrats want to challenge us in court and hold up unemployment benefits to those hardworking Americans who are out of a job because of COVID, they’re going to have a lot of explaining to do,” Mnuchin said.

Both the White House and congressional Democrats indicated Sunday they wanted to resume negotiations, but no talks were scheduled.