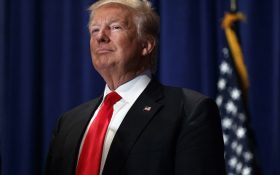 President Donald Trump is asking Congress to work with him to extend school choice programs.

Trump says “every child has a right to fulfill their potential.”

He praised a school voucher program in Washington, D.C., that allows low-income students to use federal funds to attend private schools. Trump called on Congress to give school choice options to millions of students in the U.S., including low-income African-American and Hispanic students.

Some states have voucher programs but the one in the nation’s capital is the only federal program.

On Wednesday, the president welcomed several dozen students to the White House who are taking part in the D.C. voucher program. A federal study last week found that the program leads to lower math scores for students, but higher parent satisfaction.