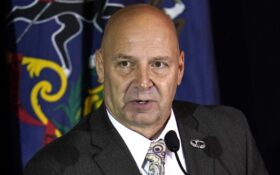 A Republican state senator who has talked of possibly running for governor of Pennsylvania in 2022 said Wednesday that former President Donald Trump asked him to run and promised to campaign for him.

Sen. Doug Mastriano, R-Franklin, said he met with Trump on Monday for “an hour and fifteen minutes” at Trump Tower in New York and, among other things, discussed the governor’s race and the candidates.

“He had asked me to run some months ago,” Mastriano said during a sit-down interview in the studio of WEEO-FM in Chambersburg. “He said, ‘Doug, run and I’ll campaign for you.’”

Mastriano, first elected two years ago, has talked of speaking with Trump at least 15 times. In November, Mastriano organized a hearing in Gettysburg that featured Rudy Giuliani and a phone call appearance by Trump in which the president claimed the election was rigged and urged state lawmakers to overturn the result.

Mastriano also hosted Giuliani in Chambersburg on Saturday for a fundraiser, where the LNP newspaper reported that Mastriano posed for a photo with a man wanted by the FBI in connection with the Jan. 6 attack on the U.S. Capitol.

Told of Mastriano’s comments, a senior Trump aide did not address them or dispute them in a statement in response. But Trump has not endorsed anyone in the race, still a year out from the primary.

Mastriano has become a one-man force in conservative politics in Pennsylvania, leading anti-mask protests last year, pushing to overturn Trump’s reelection loss and showing up outside the U.S. Capitol during the Jan. 6 riot.

Mastriano’s statements come days after Lou Barletta, the Trump-endorsed nominee for U.S. Senate in 2018, said he is running for governor of Pennsylvania.

Barletta said last weekend that he will try to earn Trump’s endorsement, but that he had not discussed his candidacy with the former president.

Barletta, a former Hazleton mayor and four-term member of Congress, served as Trump’s campaign co-chair in Pennsylvania in the 2016 presidential campaign and on Trump’s transition team before becoming one of the former president’s biggest allies on Capitol Hill.

Barletta ran for U.S. Senate in 2018 at Trump’s urging, and drew two Trump visits to Pennsylvania to help rally support for his candidacy, including one where Trump called Barletta a “star” and a “legend.”

Barletta campaigned for Trump, was one of his 20 handpicked Pennsylvania electors last year and has hired members of Trump’s presidential campaign team for his gubernatorial campaign.

Barletta — like most in the GOP — has not disputed Trump’s baseless claims that the election was stolen from him, despite no evidence of widespread fraud.