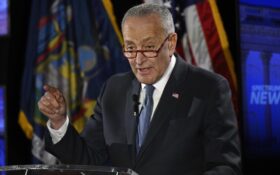 However, Biden has found himself on the wrong side of a new bipartisan consensus.

Senate Democrat Leader Chuck Schumer discussed TikTok’s links to PRC at a press conference in 2020. “I have urged that TikTok be closed down in America,” Schumer said.

Warner, chair of the Senate Intelligence Committee, spoke about TikTok’s twofold threat: its threat to user privacy and its threat to national security.

“TikTok is an enormous threat. It’s a threat on two levels, one, it is a massive collector of information, oftentimes of our children,” Warner said on Fox News Sunday.

“They can visualize even down to your keystrokes. So, if you are a parent and have a kid on TikTok, I would be very, very, concerned, all of that data that your child is inputting and receiving is being stored somewhere in Beijing.”

Warner went on to discuss TikTok’s potential threats to our national security. He tied it to the disinformation wars, a key issue for the Democrats.

“The second problem is that TikTok in a sense is a broadcasting network in a sense and if the Chinese communist party and TikTok at the end of the day has to be reliant on the Communist Party, the China law states that,” Warner said.

“If they want to dial up the fact we’re going to decrease content that criticizes Chinese leadership but increase the content kids may be seeing saying, Taiwan really is part of China, that is a distribution model that would make RT or Sputnik or some of the Russian propaganda models pale in comparison.”

Schumer has said, according to the Wall Street Journal, “There are 110 million Americans who have information with TikTok, and the Chinese government could be grabbing every one of them.

Sen. Josh Hawley, R-Mo., has made the same point as Warner. “TikTok is currently a major security risk, both to our data security and to our national security,” Hawley said, according to the Journal.

TikTok can track its users’ keystrokes in its in-app browser, according to one investigation. In other words, the app can likely access its users’ passwords and credit card numbers.

The app has also faced criticism for allegedly censoring certain content and for allegedly shortening its users’ attention spans.