Trump arrives in Dayton to offer condolences - The Horn News 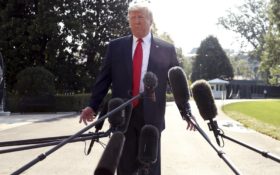 The president and first lady Melania Trump began their trip at the hospital where many of the victims of Sunday’s attack were treated. Reporters traveling with the president were kept out of view, but White House Press Secretary Stephanie Grisham tweeted that the couple had “been stopping between rooms to thank the hardworking medical staff. Very powerful moments for all!”

Trump rejected the media’s assertion that he bears responsibility for the two shootings.

“My critics are political people,” Trump said, noting the far-left political leanings of the shooter in the Dayton killings. The killer was an outspoken supporter of Sen. Elizabeth Warren, D-Mass., and a socialist.

“Had nothing to do with President Trump,” Trump said. “So, these are people that are looking for political gain.”

“It shows that he actually cares, if he talks to individual families,” said Melendez, who credits Johnson with helping his 9-year-old daughter survive the attack by pushing her under a counter. Melendez, an Army veteran and the son of Mexican immigrants, said he holds only the shooter responsible for the attack.

“That person had the intent to hurt people, he already had it,” he said. “No one’s words would have triggered that.”

Trump’s visits were similar to those he’s paid to grieving communities in the past, with the Republican president and the first lady saluting first responders and spending time with mourning families and survivors.

“We’ll be meeting with first responders, law enforcement and some of the victims and paying my respects and regards,” Trump said Wednesday morning. “It’s a terrific opportunity, really, to congratulate some of the police and law enforcement. The job they’ve done was incredible. Really incredible”

White House spokesman Hogan Gidley said Tuesday that Trump also wants “to have a conversation” about ways to head off future deadly episodes.

“We can do something impactful to prevent this from ever happening again, if we come together,” the spokesman said.

Trump said before leaving Washington that Congress was making progress on possible new gun legislation. He said he has had “plenty of talks” with lawmakers in recent days and that there is a “great appetite to do something with regard to making sure that mentally unstable, seriously ill people aren’t carrying guns.”

The hateful El Paso manifesto’s author — police believe it was the shooter but the investigation continues — insisted his opinions “predate Trump and his campaign for president.” However, some of his words did echo some of the views Trump has expressed on illegal immigration.

In response, the White House has invited internet and technology companies to a roundtable discussion on combating online extremism Friday.