Trump announces North Korea meeting will be on... - The Horn News 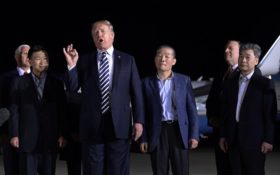 President Donald Trump will meet with North Korea’s Kim Jong Un in Singapore on June 12, Trump announced Thursday, hours after suggesting that the release of three Americans held in the North heralded a potential breakthrough toward denuclearizing the Korean Peninsula.

“We will both try to make it a very special moment for World Peace!” Trump said in a tweet.

The highly anticipated meeting between Kim Jong Un and myself will take place in Singapore on June 12th. We will both try to make it a very special moment for World Peace!

With the final details in place, Trump and Kim will meet in the first North Korea-U.S. summit talks since the end of the 1950-53 Korean War. Kim has suspended nuclear and missile tests and put his nuclear program up for negotiation, but questions remain about how serious his offer is and what disarmament steps he would be willing to take.

Earlier Thursday, with the American former detainees by his side on a dark air base tarmac, Trump said it was a “great honor” to welcome the men back to the U.S., but he added that “the true honor is going to be if we have a victory in getting rid of nuclear weapons.”

Vice President Mike Pence, Secretary of State Mike Pompeo, other top officials and first lady Melania joined the president in the celebration in the wee hours of Thursday morning at Joint Base Andrews near Washington. The former detainees — Kim Dong Chul, Kim Hak Song and Tony Kim — had been released Wednesday amid the warming of relations between longtime adversaries.

They appeared tired but in excellent spirits, flashing peace signs and waving their arms as they emerged from the aircraft. When asked by reporters how it felt to be home, one of the men answered through a translator, “It’s like a dream; we are very, very happy.” They later gave the president a round of applause.

Suggesting that recovery from their ordeals would take time, Pence recounted Thursday morning that Pompeo told him that at the refueling stop in Anchorage, “one of the detainees asked to go outside the plane because he hadn’t seen daylight in a very long time.”

Trump thanked North Korean leader Kim for releasing the Americans and said he believes Kim wants to reach an agreement on denuclearization at their upcoming summit. “I really think he wants to do something,” the president said.

Pence said Thursday on NBC News, “In this moment the regime in North Korea has been dealing, as far as we can see, in good faith.”

Singapore had emerged as the likely host of the summit after Trump yielded to the concerns of his aides and backed off his desire to hold the meeting at the inter-Korean demilitarized zone.

Located at the southern tip of Malaysia, Singapore is a regional hub in Southeast Asia whose free enterprise philosophy welcomes trading partners from everywhere. It has close diplomatic and defense ties with the U.S. and yet is also familiar ground for North Korea, with which it established diplomatic relations in 1975.

A prosperous city state, Singapore has already hosted a historic meeting between two leaders burdened with a legacy of bad blood and mutual distrust. Chinese President Xi Jinping and Taiwan’s then-President Ma Ying-jeou came in 2015 to discuss cross-strait issues, the first such meeting since Mao Zedong founded the People’s Republic of China in 1949.

Among the factors for its choosing are its proximity to North Korea, the experience of its security forces, and the fact that Pyongyang has had diplomatic relations with the country since 1975.

The city is “a great location” for the summit, said Tom Plant, who specializes in nuclear and proliferation issues at London’s Royal United Services Institute.

“Kim will be on friendly territory, not hostile territory. But he wouldn’t be on home turf,” Plant said.

Singapore is familiar ground for the reclusive communist country, which has its embassy in Singapore’s central business district.

Singapore also is welcome ground for the United States. It is a large trading partner, the second-largest Asian investor, and a longtime supporter of its military presence in the Asia-Pacific region. It’ also the regional headquarters of large U.S. companies including Google, Facebook and Airbnb. Diplomatic relations between the two countries were established in 1966.

“The North Korean side will likely have a very large number of logistical and protocol issues it wants addressed by the summit venue, so having a (North Korean) embassy in the country where the summit is to be held is likely a requirement,” said Malcolm Cook, a senior fellow at the ISEAS-Yusof Ishak Institute in Singapore.

Located just over 3,000 miles (4,800 kilometers) from North Korea, Singapore is comfortably within the flying range of its aircraft. Flying to western Europe would require a stop or two to refuel.

“Singapore is neither too far away as European nations are, allowing Kim Jong Un’s private jet to make it here without refueling, nor too close that Trump might be seen as ‘giving way’ to Kim by having to travel a longer distance than the latter,” said Nah Liang Tuang, a research fellow at the Institute of Defence and Strategic Studies.

Former U.S. Ambassador to Singapore David Adelman said Singapore was an ideal site because it has been “an honest broker between East and West.”

“Singapore has been a great friend to the U.S. but also Singapore has carefully worked to be a friend to all, which has earned it trust in capitals around the world,” he said.

Its free enterprise philosophy welcomes trading partners from everywhere, regardless of politics.

“We hope this meeting will advance prospects for peace in the Korean Peninsula,” Singapore’s Ministry of Foreign Affairs said in a statement.