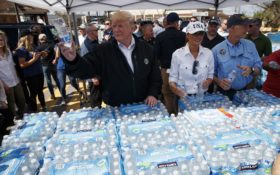 Michael Rollins shook President Donald Trump’s hand Monday at the front door of his hurricane-ravaged home in the Florida Panhandle, saying he decided to ride out the storm because he didn’t have anywhere else to go.

“I knew I had made my commitment to stay with my animals,” Rollins told the president, standing by a massive pine tree down on the front lawn.

The president, along with first lady Melania Trump, listened to stories of survival and struggle as he surveyed the wreckage of Hurricane Michael. As Trump toured, the death toll stood at 17, with thousands of buildings gutted and tens of thousands of homes and businesses without electricity. Trump paused his election-season campaign blitz for the visit, largely putting politics on the backburner for the day.

Trump visited an aid distribution center, set up in a parking lot filled with boxes of diapers, piles of clothes and bottled water. He and the first lady handed out bottles of water to residents who came to see him and tell him their stories about the storm.

“Somebody said it was like a very wide — extremely wide — tornado. … Beyond any winds that they’ve seen,” Trump said. “Look behind you. I mean, these massive trees are just ripped out of the earth. This is really incredible. This road — five hours ago, you couldn’t ride on it.”

Before visiting the city of Lynn Haven, Trump took a 55-minute helicopter tour of the region to see how the local and state rescue efforts were progressing. He saw houses stripped of their roofs, a water tower that had toppled to the ground and 18-wheel trucks scattered in a parking lot.

The president landed at an airport near Panama City, where power poles bowed toward the ground, pieces of metal roofing were scattered about and pine trees had been uprooted or were snapped in half. The view during the drive included houses smashed by trees, bent billboards and a demolished trailer park.

Power crews were working to restore power to thousands.

“Everything I’ve asked the president for, he’s come through,” said Scott, the Republican candidate for U.S. Senate. “We still have a lot of work to do. We’re still getting water out, getting food out.”

Rollins was among many people in the Panhandle who rode out the storm. Kayla Runyon, 22, said she evacuated to a hotel in Callaway with some relatives.

“We watched out the window and we just watched buildings be demolished,” Runyon said. “Steel beams started coming through the hotel windows and through the walls. There were windows busting. We were scared. It was scary.”

Trump also surveyed storm damage in Georgia, where the focus was on farmers whose crops were wiped out by the hurricane.

At a farm in Macon, Kevin Rentz, a fourth-generation cotton and peanut farmer, told Trump he lost his entire cotton crop. Rentz said he’s still digging up peanuts, but the problem is storing them without electricity.

Trump tried to reassure the farmers, asking whether they had insurance and promising that electricity would be restored soon.

“You’ll get it back,” Trump told Rentz.

In Florida, the mood at the FEMA aid distribution center seemed lighthearted despite the surrounding devastation, as Trump bantered with a crowd that seemed more interested in selfies with him than in the bottled water he was offering in the heat and humidity.

A woman carrying a toddler posed for a photo and then told Trump he should come back for barbecue. Another woman thanked the first lady for her anti-bullying campaign.