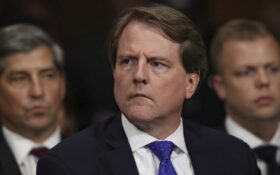 Former White House counsel Don McGahn will answer questions in private from the House Judiciary Committee in an apparent resolution of a longstandin dispute over his testimony, according to a court document filed Wednesday evening.

Democrats who run the committee have sought McGahn’s testimony for two years as part of an investigation of potential obstruction of justice by former President Donald Trump during special counsel Robert Mueller’s Russia investigation.

They pressed ahead with the subpoena even after President Joe Biden took office in January.

Under an agreement negotiated by the committee and Justice Department, McGahn will only be questioned about information attributed to him in publicly available portions of Mueller’s report.

The date of the private interview has not been set. A transcript will be made public about a week later, the filing in the U.S. Circuit Court of Appeals for the District of Columbia said.

Trump’s Justice Department had fought efforts to have McGahn testify. U.S. District Judge Ketanji Brown Jackson in 2019 rejected Trump’s arguments that his close advisers were immune from congressional subpoena. Biden has nominated Jackson to the appeals court in Washington.

The case has been in that court ever since Jackson’s ruling. The full appeals court is scheduled to hear the case for a second time next week.

The issue is whether the House has authority under the Constitution or federal law to ask courts to enforce a subpoena against an executive branch official.

The administration and the House have asked the court to call off the hearing, preferring to reach an agreement rather than risk an unfavorable court ruling.