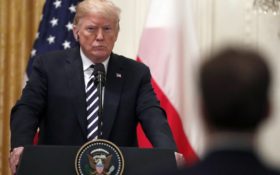 President Donald Trump took the podium to announce the departure of White House Press Secretary Sarah Huckabee Sanders on Thursday — and he wasn’t shy about his praise.

“She’s good, she’s great,” Trump said. “And she’s gonna be leaving the service of her country.”

“She comes from a great state: Arkansas. That was a state I won by a lot, so I like it,” Trump joked. Sanders laughed as she stood by the president’s side.

Sanders, who said that working with Trump was the “honor of a lifetime,” will be stepping down from her role where she stood in the spotlight in some of the most contentious White House moments.

And she said she wouldn’t take any of it back.

“I’ve loved every minute — even the hard minutes,” she said.

Sanders transitioned almost seamlessly into the role of press secretary when the former, Sean Spicer, resigned in 2017. In her role as the face of the White House, Sanders was frequently attacked by the liberal media. For example, CNN’s April Ryan once suggested that Sanders’ should have her head cut off.

Certainly, Sanders’ job title wasn’t ever an easy one.

She was once kicked out of a restaurant in Virginia because she worked for the Trump administration.

“As far as I know, I’m the first press secretary in the history of the United States that’s required Secret Service protection,” Sanders said.

“I told her not the bother,” Trump once wrote in a tweet.

Because of her resilience, Sanders became a influencer around the White House.

What’s next for Sanders? Trump has suggested she run for governor of Arkansas.

Whatever she does, she certainly has the pose to handle nearly any job.