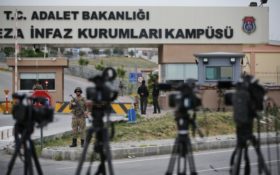 The Trump administration warned Turkey on Wednesday that it is considering punitive “consequences” if the NATO ally does not throw out the charges or acquit an American pastor accused of espionage and aiding terrorist groups.

Wess Mitchell, the top U.S. diplomat for Europe, said the charges against Andrew Brunson, 50, of North Carolina, were “laughable.”

“The Turks claim to have a high standard of justice, the indictment suggests otherwise,” Mitchell told the House Foreign Affairs Committee. “This is clearly an innocent man. We are watching to see if the Turks adhere to their stated standards of justice. If that does not happen, we are considering options for consequences.”

He said the State Department is consulting with Congress about “possible measures” to take against Turkey if Brunson is not released, but he did not elaborate.

Mitchell’s comments came a day after President Donald Trump called Brunson “a fine gentleman and Christian leader” who was “being persecuted in Turkey for no reason. They call him a Spy, but I am more a Spy than he is. Hopefully he will be allowed to come home to his beautiful family where he belongs!”

Brunson, who faces up to 35 years in prison, denied any wrongdoing at a court hearing Monday in Aliaga, Turkey, that was attended by the U.S. ambassador at-large for religious freedom, Sam Brownback.

Brunson was arrested in the aftermath of a 2016 coup attempt in Turkey for alleged links to the outlawed Kurdistan Workers’ Party, or PKK, as well as a network led by U.S.-based Muslim cleric Fethullah Gulen, who is blamed by Turkey for the political unrest.

“I don’t accept any of the allegations or accusations,” the state-run Anadolu Agency quoted Brunson as telling the court.

“I did not engage in any illegal activity. I had no relations with anyone engaged in such activity,” Brunson said. “I am a Christian pastor. I did not join an Islamic movement. Their aims and mine are different.”