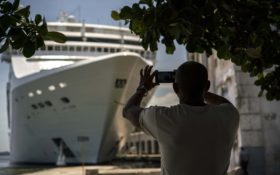 Americans seeking to visit Cuba must navigate a complicated maze of travel, commerce and financial restrictions unveiled Wednesday by the Trump administration, part of a new policy to further isolate the island’s communist government.

Now off-limits to U.S. citizens are dozens of Cuban hotels, shops, tour companies and other businesses included on a lengthy American blacklist of entities that have links to Cuba’s military, intelligence or security services. And most Americans will once again be required to travel as part of heavily regulated, organized tour groups run by U.S. companies, rather than voyaging to Cuba on their own.

The stricter rules mark a return to the tougher U.S. stance toward Cuba that existed before former President Barack Obama and Cuban President Raul Castro restored diplomatic relations in 2015. They come as President Donald Trump tries to show he’s taking action to prevent U.S. dollars from helping prop up the Cuban government.

Still, the policy is only a partial rollback of Obama’s changes. Cruise ship visits and direct commercial flights between the countries will still be permitted. Embassies in Washington and Havana stay open.

The rules are designed to steer U.S. economic activity away from Cuba’s military, intelligence and security services, which dominate much of the economy through state-controlled corporations. The goal is to encourage financial support for Cuba’s growing private sector, said senior Trump administration officials, who briefed reporters on a conference call on condition they not be quoted by name.

To that end, the Treasury Department said it is expanding and simplifying a license that allows some U.S. exports to Cuba despite the embargo. They include tools and equipment to build or renovate privately owned buildings.

“We have strengthened our Cuba policies to channel economic activity away from the Cuban military and to encourage the government to move toward greater political and economic freedom for the Cuban people,” Treasury Secretary Steven Mnuchin said.

Trump announced his new policy in June during a speech in Miami’s Little Havana neighborhood, the cradle of Cuban-American resistance to Castro’s government. The administration took several months to finalize the details of the new rules, which will take effect Thursday.

The new policy maintains several categories of travel to Cuba that are permitted despite the embargo, which carries on decades after the Cold War’s end. Americans can still travel on educational and “people to people” trips as well as visits designed to support the Cuban people by patronizing privately owned small businesses that have popped up across the island in recent years.

But those traveling to support Cuba’s people must have a daylong schedule of activities designed to expose them to Cubans and steer dollars toward citizens, such as renting rooms in private homes. Those on organized, “people to people” or educational visits must be accompanied by a representative of the U.S.-based group organizing the trip.

There was no immediate reaction from Cuba’s government. But the rules were quickly denounced by travel groups and proponents of closer U.S. ties to the island.

“Cuba is still open for business,” said Charel van Dam of the Cuba Travel Network. “It is still possible for people to travel, but I think these announcements will serve mainly as something to scare off people who want to visit.”

Sen. Patrick Leahy, D-Vt., a vocal advocate of improved U.S.-Cuban relations, noted the announcement came as Trump was in China pushing more U.S. business engagement with another communist-run country. “The hypocrisy of the White House ideologues is glaring,” Leahy said.

The rules come amid deep strains in the U.S.-Cuba relationship stemming from invisible, unexplained attacks that have harmed more than two dozen U.S. government personnel in Havana since 2016. The attacks led the Trump administration to order most of its diplomats to leave Cuba in September and issue a sweeping travel warning urging Americans to stay away.

Officials insisted that the new, tougher rules had no connection to the attacks. The U.S. first complained to Cuba’s government about the attacks in February, four months before Trump announced his broader policy intentions.

Some exceptions will accommodate Americans who already plan to visit Cuba. Those who booked “people to people” trips before Trump’s June announcement will be exempt, along with Americans who organized education trips before the rules start on Thursday. Business deals already reached with entities on the prohibited list will be allowed to proceed.

It’s unclear how aggressively the U.S. will police the new rules. Officials said they would use information obtained from several U.S. agencies to catch violators, who could be subject to penalties and criminal prosecution.

The blacklist bars business with the large military-run corporations that dominate the Cuban economy. These include GAESA and CIMEX, holding companies that control most retail business on the island; Gaviota, the largest tourism company; and Habaguanex, which runs Old Havana.

It also targets a new cargo port and special trade zone outside the city of Mariel that has been the focus of Cuba’s efforts to draw foreign investment in manufacturing and distribution.

Blacklisted hotels include the Manzana Kempinski, which opened with great fanfare this year as Cuba’s first to meet the international five-star standard.

The overall impact on American business with Cuba will likely be limited. Trade is sparse. Many American travelers already stay at hotels not on the no-go list, and the company that imports most American food products to Cuba is similarly unaffected.

Sponsored: Before your next shower (read THIS now)