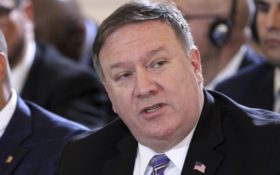 The Trump administration renewed its call Monday for the Organization of American States to suspend Venezuela and for other members to step up pressure on the country’s government to restore constitutional order.

Secretary of State Mike Pompeo told the Western Hemisphere bloc that President Nicolas Maduro’s government was in the process of a “full-scale dismantling” of democracy. Vice President Mike Pence had earlier called for Venezuela’s suspension.

In his remarks, Pompeo again condemned last month’s disputed elections, in which Maduro was returned to power, as a “sham” and said the government had “exhausted all options for dialogue.”

“The suspension is not a goal by itself, but it will show that the OAS backs its words with actions,” said Pompeo at the General Assembly, the highest-level meeting of the OAS.

A total of 20 foreign ministers of the 34 member states of the body had agreed earlier Monday to include for the first time in the agenda of its General Assembly an item related to the crisis in Venezuela.

The United States, Mexico and other members of the so-called Lima Group were pushing for the adoption of a resolution critical of Maduro’s government. It wasn’t immediately clear whether that resolution would call for Venezuela’s suspension and if such a vote could take place before the assembly ends on Tuesday.

The consent of two-thirds of the member states are needed to suspend another country and that can only be done during an extraordinary session. The current session is a regular one, not extraordinary.

The Lima Group and the U.S. had already refused to recognize the victory of Maduro in the May presidential election, saying it failed to meet “international standards of a democratic, free, just and transparent process.”

Venezuela’s foreign minister Jorge Arreaza responded by accusing the U.S. of illegal interference in its internal affairs and violating the OAS charter by imposing sanctions.

“No government has the moral authority to recognize or not our government,” said Arreaza.

Venezuela is already maneuvering to leave the OAS itself. It began that two-year process in April 2017.

Pence is expected to echo Pompeo’s call for Venezuela’s suspension at a cocktail reception Monday evening at the White House for top officials attending the OAS assembly. Last month he made a similar call when he became the first U.S. vice president to address the OAS since Al Gore in 1994.