Trump admin to Congress: SHUT UP! - The Horn News 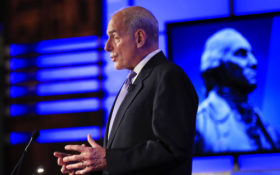 Democrats in Congress are doing what they do best: Whining a bunch, but not taking any action to solve their own problems.

But now President Donald Trump’s Homeland Security Secretary John Kelly has had enough, and he sent a clear message to Congress.

The tough-talking retired Marine general says members of Congress who don’t like the Trump administration’s aggressive approach to immigration enforcement should change either change the law or “shut up” once and for all.

He made his remarks in a speech Tuesday at George Washington University.

Kelly said critics, particularly lawmakers, are too quick to assume the worst of Homeland Security employees who are enforcing laws intended to keep America safe.

Critics say the agency is too heavy-handed in enforcement operations, including arresting immigrants in the U.S. illegally who do not have criminal records — ignoring the fact that being here illegally is itself a criminal act.

Kelly says members of Congress who don’t like immigration laws “should have the courage and skill to change the laws. Otherwise they should shut up and support the men and women on the front lines.”

Comment “Amen!” below if you agree with Sec. John Kelly!