Trump: "A good relationship was formed" with North Korea - The Horn News 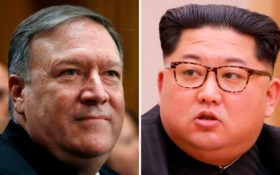 President Donald Trump on Wednesday confirmed that his CIA chief secretly met with Kim Jong Un in North Korea and said “a good relationship was formed” heading into the adversaries’ anticipated summit.

Mike Pompeo’s highly unusual talks took place “last week,” Trump tweeted, and “went smoothly,” with details about the presidential meeting within the next few months “being worked out now.”

Mike Pompeo met with Kim Jong Un in North Korea last week. Meeting went very smoothly and a good relationship was formed. Details of Summit are being worked out now. Denuclearization will be a great thing for World, but also for North Korea!

“Denuclearization will be a great thing for World, but also for North Korea!” Trump wrote while at his Florida estate, where he was hosting Japanese Prime Minister Shinzo Abe.

Trump had disclosed on Tuesday that the U.S. and North Korea were holding direct talks at “extremely high levels” in preparation for a possible summit. He said five locations were under consideration for the meeting, which could take place by early June.

Confirmation of Pompeo’s trip later came from two officials, who were not authorized to discuss the meeting publicly and spoke on condition of anonymity.

The Washington Post, which first reported the development, said it took place over Easter weekend — just over two weeks ago, shortly after Pompeo was nominated to become secretary of state.

Kim’s offer for a summit was initially conveyed to Trump by South Korea last month, and the president shocked many by accepting it. U.S. officials indicated over the past two weeks that North Korea’s government had communicated directly with Washington that it was ready to discuss its nuclear weapons program.

It would be the first-ever summit between the U.S. and North Korea during more than six decades of hostility since the Korean War. North Korea’s nuclear weapons and its capability to deliver them by ballistic missile pose a growing threat to the U.S. mainland.

The U.S. and North Korea do not have formal diplomatic relations, complicating the arrangements for contacts between the two governments. It is not unprecedented for U.S. intelligence officials to serve as a conduit for communication with Pyongyang.

China, North Korea’s closest ally, said it welcomes direct contact and talks between the U.S. and North Korea after news emerged of Pompeo’s meeting with Kim.

Chinese foreign ministry spokeswoman Hua Chunying said at a briefing Wednesday that Beijing hopes the two sides will work on a political resolution of tensions on the Korean Peninsula and set up a peace mechanism. The Koreas are technically still in a state of war after fighting in the 1950-53 Korean War ended with a cease-fire, not a peace treaty.

At a Senate hearing last week on his nomination, Pompeo played down expectations for a breakthrough deal on ending North Korea’s nuclear weapons program at the planned summit, but said it could lay the groundwork for a comprehensive agreement on denuclearization.

“I’m optimistic that the United States government can set the conditions for that appropriately so that the president and the North Korean leader can have that conversation and will set us down the course of achieving a diplomatic outcome that America and the world so desperately need,” Pompeo told the Senate Foreign Relations Committee.

After a year of escalating tensions, when North Korea conducted nuclear and long-range missile tests that drew world condemnation, Kim has pivoted to international outreach.

The young leader met China’s President Xi Jinping in Beijing in late March, Kim’s first trip abroad since taking power six years ago. He is set to meet South Korean President Moon Jae-in in the demilitarized zone between the rival Koreas on April 27.