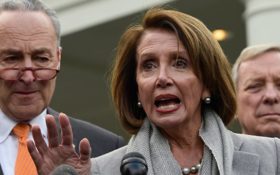 California Rep. Nancy Pelosi — the former House Democrat leader — gave a bombshell interview Saturday… and she slammed the Democrats on the opposite coast.

Pelosi discussed the House Democrats’ midterm loss, and she blamed it on the New York Democrats’ failure to address voters’ one key concern.

“She said that she believed the Democrats could have held onto the House in November if top New York pols had realized that the key issue in that state was crime,” The New York Times columnist Maureen Dowd wrote after her interview with Pelosi.

Over their lunch at the ritzy Four Seasons hotel, Pelosi herself told the columnist, “That is an issue that had to be dealt with early on, not 10 days before the election,”

Pelosi went on to blame fellow Democrat Kathy Hochul, the unpopular governor of New York. “The governor didn’t realize soon enough where the trouble was,” the congresswoman said.

Last year, Pelosi’s own family was shaken by a brutal crime. Her husband, Paul Pelosi, suffered an attack by a home invader wielding a hammer. Pelosi herself described the home as “a crime scene.”

“It’s going to be about three or four months before he’s really back to normal,” she said of her 82-year-old husband.

Pelosi surprised the media by addressing this issue. Pelosi’s remarks were even retweeted by the conservative commentator Ann Coulter.

The California leader has slammed her fellow Democrats before. In a 2019 interview, she fired shots at her caucus’ more media-savvy members, like New York Rep. Alexandria Ocasio-Cortez.

“We have to have a solution,” Pelosi said at the time. “Not just a Twitter fight.”

Since leaving party leadership, Pelosi has become yet another rank-and-file member of Congress. She appears to be enjoying the new role.

“While [current House speaker Kevin McCarthy] tried to quell the chaos, Pelosi was busy ruminating on whether she should wear a blue and yellow sweater (Golden State Warrior colors) to take her teenage grandsons to the game against the Wizards that afternoon,” Saturday’s column said.

“Upward and onward,” Pelosi told the columnist. “I’m thrilled with the transition. I think it was beautiful.”