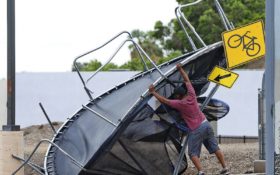 After soaking northwestern Mexico with heavy rains as it neared the Baja California Peninsula, reportedly claiming at least one victim, Tropical Storm Rosa is expected to drench the U.S. Southwest.

From Arizona to Utah, some residents filled sandbags in anticipation of heavy rainfall forecasts and potential flooding.

The center of Rosa, which was a hurricane until late Sunday, was expected to hit Baja California and Sonora by early Tuesday, bringing 3 to 6 inches (7.5 to 15 centimeters) of rain, the U.S. National Hurricane Center said.

It’s then expected to move quickly northwestward as it weakens, bringing 2 to 4 inches (5 to 10 centimeters) of rain to central and southern Arizona and 1 to 2 inches (2.5 to 5 centimeters) to the rest of the desert Southwest, Central Rockies and Great Basin. Isolated areas might see even more precipitation.

In southern Arizona, heavy rain Monday flooded streets in Yuma and caused power outages in parts of the city. At least six roads in Tucson were closed because of flash flooding from washes that overflowed.

The Utah National Guard was activated Monday to assist in flood mitigation efforts in Utah County.

Forecasts call for heavy rainfall in the watch areas, which include Las Vegas, Phoenix and Salt Lake City, with possible flooding in slot canyons and normally dry washes and a potential for landslides and debris flows from recent wildfire burn scars.

National Weather Service meteorologists in Phoenix said central and northern Arizona stood to get hit with the heaviest amounts of precipitation.

Metropolitan Phoenix, where temperatures were above 100 degrees Fahrenheit (38 Celsius) only a few days ago, had already cooled to the 80s on Monday thanks to Rosa.

Moisture associated with the storm arrived ahead of it, bringing rain Sunday night and Monday morning.

Phoenix meteorologist Jaret Rogers said more showers were expected across central Arizona before a weakened Rosa was to arrive in the area Tuesday morning.

According to the National Weather Service, the entire Phoenix area is expected to see between 1 and 2 inches (2.5 to 5 centimeters) of rain. But some areas could see between 2 to 3 inches (5 to 7.5 centimeters).

“All that means is conditions are favorable for flash flooding if it rains,” Rogers said. “It doesn’t mean something’s imminent.”

Rosa’s maximum sustained winds had decreased to 40 mph (65 kph) as of Monday afternoon, and the storm’s center was heading north-northeast at 10 mph (17 kph).

The Civil Defense agency for Baja California state said schools were closed Monday in several communities, including the state capital of Mexicali, across the border from Calexico, California; San Felipe, on the northern Sea of Cortez; and south of Ensenada, on the peninsula’s Pacific coast.

Federal authorities declared a state of emergency for Ensenada and Mexicali. Various Mexican media outlets reported that a woman was swept away by floodwaters and drowned in the city of Caborca, Sonora, on the Sea of Cortez.

Meanwhile, Tropical Storm Sergio was strengthening in the Pacific and was forecast to reach hurricane force, though it posed no immediate threat to land.