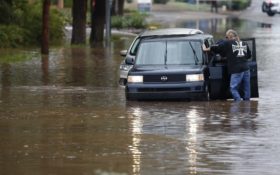 Remnants of a tropical storm drenched parts of the desert Southwest on Tuesday, trapping some drivers on swamped Phoenix streets as authorities prepared for possible flash flooding in Arizona, central Utah and elsewhere.

Rosa, a hurricane that was downgraded to a tropical storm and then to a tropical depression, reportedly killed one person in northwestern Mexico before moving north into the U.S.

The National Weather Service issued a flash-flood warning for the Phoenix area, saying that more than 2 inches (5 centimeters) of rain fell in metro Phoenix by midmorning and additional rain was expected. The day was the city’s second wettest October day on record, the agency said.

Meteorologist Jaret Rogers said the rain appeared to be dissipating, with scattered showers predicted for the rest of the day and into the next. The moisture from the storm was expected to move out of Arizona by Wednesday afternoon and bring rain to Utah and Colorado.

Flash-flood watches remained in effect for parts of those two states.

Utah Gov. Gary Herbert declared a state of emergency Tuesday evening in advance of potential flooding from the remnants of Rosa.

Herbert said communities near burn scars created by recent wildfires were at increased risk for flash flooding and debris flow.

On Monday, Herbert mobilized about 200 National Guard soldiers to prepare for potential flooding south of Salt Lake City. The soldiers were building flood berms and erecting barriers and sandbags.

Phoenix sees sudden and heavy downpours during the summertime monsoon, but the continuously falling rain is a rarity.

The heavy showers caused a riverbed to overflow, spilling muddy waters into a north Phoenix intersection. Firefighters slogged through waist-deep water to get to people stuck in their cars. Crews pulled at least six people, including a child, from vehicles and carried them one at a time to a firetruck.

Around 10 vehicles, including a bus, were either at a standstill in the water or tried to drive through it.

Rogers warned that even a short outburst of rain could still cause flooding in some areas.

“It won’t take much to add to the flooding potential,” Rogers said. “Once the ground’s saturated, it basically can’t hold any more water. It just runs off rather than being absorbed by the ground.”

The wet weather was a factor in numerous Phoenix-area freeway wrecks, but no serious crashes were reported, said Trooper Kameron Lee of the Arizona Department of Public Safety.

A reporter for Phoenix news station KNXV-TV posted a video on social media showing a person riding a unicycle into a flooded area, prompting the weather service to reiterate that all types of vehicles should stay away.

The rain also led three elementary schools and one high school to close for the day. Maricopa Community Colleges canceled classes at all 10 of its campuses.

In parts of southern Arizona, a flood warning was in effect until midafternoon. Heavy rain Monday flooded streets in the city of Yuma at the U.S.-Mexico border and caused power outages. At least six roads in Tucson were closed because of flash flooding.

Mexican authorities had declared a state of emergency for Ensenada, on Baja California state’s Pacific coast, and Mexicali, the state capital across the border from Calexico, California. Mexican media outlets reported that a woman was swept away by floodwaters and drowned in the city of Caborca, Sonora, on the Sea of Cortez.

Meanwhile, a separate storm, Hurricane Sergio, grew to major hurricane status in the Pacific on Tuesday, though it posed no immediate threat to land. It has sustained winds of 115 mph (185 kph), making it a Category 3 storm, U.S. National Hurricane Center said.

It’s centered about 870 miles (1,400 kilometers) south-southwest of the southern tip of the Baja California Peninsula and has been heading west at 13 mph (20 kph). Forecasters say they expect it to keep moving out to sea.