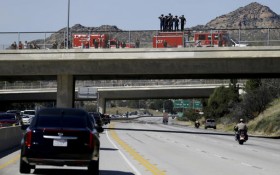 Nevada Highway Patrol says passengers must be alive in order to be counted as occupants in cars using the high occupancy vehicle lane.

The reminder was prompted by a traffic stop Monday involving a hearse traveling on the carpool lane on Interstate 15 in Las Vegas.

A trooper pulled over the hearse that was transporting a dead body.

The agency says the hearse driver assumed the body in the back counted toward the two or more occupant requirement for the lane.

The trooper let the driver off with a warning and advised him to move out of the lane.

The agency says only living, breathing people can be counted for the HOV lane.