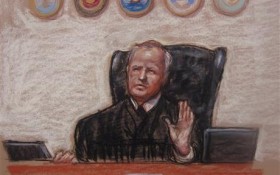 An effort to prosecute five men held at Guantanamo Bay, Cuba, for the Sept. 11 terrorist attack has hit another snag.

A two-week pretrial hearing scheduled to start Tuesday was abruptly canceled late last week by the military judge presiding over the case after he received a confidential notice from Justice Department lawyers.

The document is sealed, its contents not even disclosed to prosecutors or the defense. But there are indications the filing has raised issues that will result in further delays in a case that has been mired in the pretrial stage for years.

“I suspect we are back in this limbo stage and it will take some time to get out,” said Jim Harrington, a lawyer for Ramzi Binalshibh, one of the five men facing a tribunal known as a military commission for his alleged role in the Sept. 11, 2001, hijacking plot.

From what little information can be gleaned from the judge’s brief cancellation order, the new issue appears to be at least tangentially related to an FBI investigation of a possible security breach involving members of the Binalshibh defense team. The investigation was closed without criminal charges and the judge, Army Col. James Pohl, ultimately decided that it did not create a conflict of interest that required Harrington to step down.

Pohl had directed a special review team of Justice Department lawyers to look into the FBI investigation and any potential conflict. He also told them to notify him of any new investigations. That may have happened Friday, when the judge received the notice that prompted him to cancel the session.

“My best guess, and this is purely speculation, is that there is some new investigation that the special review team is advising the commission of,” said James Connell, a lawyer for defendant Ammar al-Baluchi.

The revelation of the FBI investigation in April 2014 stalled proceedings in the case for 18 months. Though the judge ruled there was no conflict, Harrington said he is still receiving court-ordered information into what he called a “gross violation of the attorney-client privilege” and there may be future revelations that the judge will have to address.

The five defendants, including self-proclaimed mastermind Khalid Shaikh Mohammad, face charges that include terrorism and nearly 3,000 counts of murder. They could get the death penalty if convicted.

All five men were held in secret CIA prisons for interrogation before they were brought to Guantanamo in September 2006 for military prosecution. The case has been dogged ever since by legal and political issues as well as the logistics of trying a case at the isolated base in southeastern Cuba. They were arraigned for a second time in May 2012 and more than a dozen pretrial hearings have been held since.

The chief prosecutor, Army Brig. Gen. Mark Martins, is legally barred from any involvement with the work of the special review team and did not predict when the proceedings would resume in a statement on the cancellation of the hearing. He said prosecutors are still working seven days a week to compile classified evidence for the defense by a Sept. 30 deadline.

“We pledge to the families of the 9/11 fallen that the United States will not rest until justice is fully achieved,” Martins said.

The next hearing is to start May 30 but the judge said in his order that “further adjusting the schedule” may be necessary.