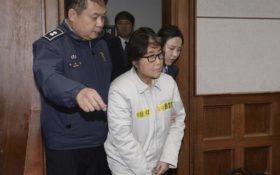 The jailed confidante of impeached South Korean President Park Geun-hye denied on the first day of her trial Monday that she used her ties to Park to extort money from big companies.

The hour-long hearing at the Seoul Central District Court was the first public appearance in weeks for the woman at the heart of a scandal that led to Park’s impeachment after millions took to streets in protests.

Choi Soon-sil, Park’s friend of 40 years, wore white prison clothes and bowed deeply to the three judges before her lawyer, Lee Kyoung-jae, denied that Choi conspired with Park and her presidential aide to pressure companies to donate tens of millions of dollars last year to foundations controlled by Choi. When directly asked by a judge about the extortion charges, she denied the charges.

The court reviewed the charges against Choi, who prosecutors say manipulated state affairs and extorted businesses, and the arguments by her lawyer. The trial resumes again on Dec. 29, but it’s not clear how long it will last. Courts normally issue a verdict within six months of an indictment, so Choi will likely get a verdict by May if prosecutors don’t bring new charges.

Ten other people swept up in the scandal also face trial. Choi is also known as Choi Seo-won, which is how she was referred to in court.

It is South Korea’s biggest trial since the 2014 court appearance of the crew of a ferry that sank and killed more than 300 people, mostly teenagers.

Choi last appeared in public on Oct. 31, when, after losing a Prada shoe in a crush of journalists and protesters, she told reporters at the Seoul prosecutors’ office that she had “committed a sin that deserves death.”

Lee, Choi’s lawyer, said Monday that prosecutors violated Choi’s rights by illegally investigating her after she had been indicted. Prosecutors denied that.

Choi is charged with abuse of power, extortion and attempted fraud. If convicted on all charges, she could receive up to 15 years in prison, according to court spokesman Shin Jae-hwan. Before her arrest, Choi said that she received some of Park’s speeches in advance, but that she didn’t know if they included confidential information. She denied the other allegations.

Prosecutors allege that Choi helped pressure 16 companies to donate a total of 77.4 billion won ($65.6 million) to create two nonprofit foundations, Mir and K-Sports. According to the prosecution, Park first brought up the idea of launching the foundations and ordered her senior secretary for policy coordination at the time, Ahn Jong-beom, to ask companies to finance their establishment while letting Choi handle the appointment of foundation officials.

Another ex-presidential aide, Jung Ho-sung, has been charged with passing on confidential information to Choi. Jung didn’t appear at Monday’s hearing, but his lawyer said Jung has largely acknowledged that he transferred such documents at Park’s instructions.

Park’s representatives have questioned the legality of her impeachment by the country’s parliament and said no serious crime was committed. The Constitutional Court is reviewing Park’s impeachment. If it rules against her, she’ll be formally unseated and must undergo a direct investigation.

Choi, 60, is a daughter of the late Choi Tae-min, a purported cult leader who served as Park’s mentor. Park, 64, is the daughter of Park Chung-hee, a dictator who ruled South Korea for 18 years until his 1979 assassination.

The two women became friends in the 1970s, around the time when Park Geun-hye began serving as first lady after her mother was killed during a failed 1974 assassination attempt on Park Chung-hee. Park Geun-hye once headed a patriotic group set up by the elder Choi, while Choi Soon-sil served as head of its college unit.

Park has immunity from prosecution for most crimes while in office. She has acknowledged that she got help from Choi for editing speeches and unspecified “public relations” issues, but has denied any other legal wrongdoing.