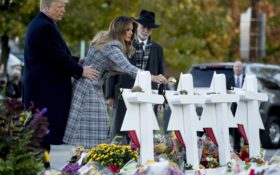 Tree of Life Rabbi Jeffrey Meyers appeared on CNN’s “New Day” on Thursday — and liberal Americans were stunned by the gratitude he showed towards President Donald Trump.

While discussing the Trump family’s visit to Pittsburgh, Meyers explained that he was “pleasantly surprised” by the warmth and compassion the president showed.

“I must say throughout the time we spent together I was pleasantly surprised by a warm and personal side to the president that I don’t think America has ever seen,” Meyers said.

On Tuesday, the president and his family visited the Tree of Life synagogue in Pittsburgh to pay their respects to the 11 victims in Saturday’s shooting. The suspect in the shooting is a feverishly anti-Trump neo-Nazi.

“I was privileged to have a private 15 or 20 minutes with the [Trump] family. The president was very warm, very consoling,” Meyers said.

He added, that the president placed his hand on Meyers’ shoulder and asked, “Rabbi, tell me how are you doing?” and Meyers explained that “throughout the time we spent together I was pleasantly surprised by a warm and personal side to the president that I don’t think America has ever seen,” he said.

Many Americans have never saw this compassionate side of Trump because the mainstream media completely ignores it.

The president does care about the struggles many Americans face, and that is why Meyers felt comfortable sharing his own experiences with Trump.

“I told my personal story of my experience, which they found quite shocking and upsetting,” he said.

Meyers explained that he and the president also talked about hate speech. “I shared the same message that I shared with you throughout the course of the week — that hate speech has no place in our society, that hate speech leads to actions of hate. Hate speech led to the death of seven of my congregants and 11 total in my building.”

The rabbi said he felt it was important for the president to see the memorial in order for him to fully understand how devastating the mass shooting has been for their community.

“I have been through this a few times. I don’t know how people would react to see that horror. It’s seared in my brain and it’s a sight I’ll never forget the rest of my life,” Meyers said.

“After we lit the 11 memorial candles…The president then asked me if I would escort he and the first lady to the makeshift memorial … and I gave him a bit of a background story about each person because it was a human being who lived, who was a good, decent person and the president needed to know something about these people because they, too, were his citizens.”