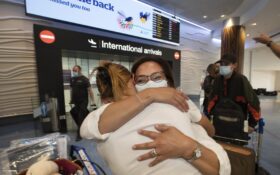 New Zealand is ending a requirement that incoming travelers isolate themselves as it continues to remove coronavirus border protections in the face of a growing domestic outbreak.

Prime Minister Jacinda Ardern on Monday said the requirement that vaccinated travelers isolate for a week after arriving would end on Wednesday. Initially the changes will apply only to returning New Zealanders, as tourists are still not allowed to visit.

Travelers will still need to test negative for the virus before leaving and after arriving.

“I know this will be welcome news to the members of our team overseas, eager to travel home to see loved ones as soon as possible,” Ardern said. “We can’t wait to see you.”

The changes were welcomed by the tourism industry, although leaders wanted more certainty over when tourists could return. International tourism used to account for about 20% of New Zealand’s foreign income but has evaporated since the pandemic began.

Ardern said Monday her Cabinet was considering fully reopening the borders to tourists sooner than the current scheduled date of July for Australians and October for those from elsewhere in the world.

Earlier this month, the government announced it was ending the requirement that most incoming travelers spend time in quarantine hotel rooms run by the military. For now, that requirement remains for unvaccinated travelers.

New Zealand enacted some of the world’s strictest border controls when the pandemic began. The measures were initially credited with saving thousands of lives and allowed New Zealand to eliminate or contain several outbreaks.

But the controls have increasingly been viewed as out-of-step in a world where the virus is becoming endemic, and in a country where it is now spreading rapidly.

New Zealand has been recording about 15,000 cases of COVID-19 per day, up from 2,000 just 10 days ago as an outbreak of the omicron variant spreads.

Some political opponents of Ardern have long called for a loosening of border restrictions and welcomed the move, although they said it should also apply immediately to tourists.