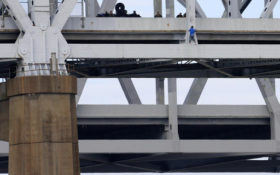 Michael Louviere apparently believed he had happened upon the scene of a traffic accident.

Instead, authorities say, the off-duty police officer in the New Orleans suburb of Westwego came upon the aftermath of horrific domestic violence that would cost him his life. 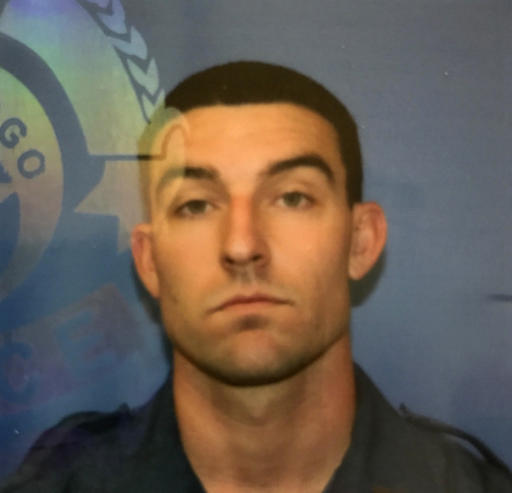 Louviere was one of two people shot to death Friday morning in mayhem that ended with a suicidal suspect shooting himself during an hours-long standoff with police as he stood on the girder of a bridge high over the Mississippi River. The suspect, Sylvester Holt, 32, was in critical condition late Friday.

During the hours of negotiations with police, Holt admitted shooting his pregnant ex-girlfriend Simone Veal, 32, and Louviere, both of whom lived in Marrero, Jefferson Parish Sheriff Newell Normand said.

“He indicated he had a pretty good idea they were dead,” the sheriff said at a news conference Friday night.

Trooper Dustin Dwight said Holt was taken to University Medical Center, the area’s Level 1 trauma center, after shooting himself once in the chest.

If Holt survives, he will face first-degree murder charges in the deaths of Veal, 32, and Louviere, 26, plus a charge of feticide, Normand said.

The late evening press conference capped a tumultuous day that began with a frantic 911 call from Veal to authorities saying that she’d just been shot and ended after with the shooting suspect fled to the busy New Orleans bridge, holding traffic captive while he negotiated with police for hours before shooting himself.

Normand said Holt, who was later identified as the shooter, had previously been romantically involved with Veal and had recently found out the woman was pregnant with a new boyfriend’s child.

Holt went Friday morning to Veal’s house and an altercation ensued during which he shot her several times.

Holt then looked for Veal’s boyfriend as the woman fled in a car with Holt eventually catching up to her.

“Witnesses said Sylvester Holt was ramming his truck into Simone’s car and firing shots into the car” before the vehicles stopped at the intersection where Louviere found them, Normand said.

The officer had just gotten off duty and was on his way home when he pulled over to help. Veal’s car was significantly damaged and she was on the ground, Normand said.

Holt then shot Louviere in the head as well, Normand said.

“All those attempts failed. At approximately 5:30 Holt shot himself in the chest,” she said.

This was not Holt’s first run-in with the law. He was the subject of restraining orders obtained by several women since 2012, Normand said.

And he’d also been arrested in September after being accused of rape. But Jefferson Parish District Attorney Paul Connick Jr. said the rape charge was later dropped after the woman repeatedly told authorities she wanted to withdraw the charge, though she still alleged that he had raped her. Holt was released from jail on Jan. 7.

Louviere, a first-year officer who had led his recruit class, may have spoken to Holt before Holt pulled a gun, Normand said.

Louviere is survived by his wife, and their daughter, 4, and son, 1.

According to Westwego Police Chief Dwayne Munch, he had served with the Marines in Afghanistan and was a rising star likely bound for a job at a larger agency.

“We knew we wouldn’t have him for long. We just didn’t know he would be gone this soon,” Munch said.

Munch said he and a doctor broke the news to Louviere’s wife at a hospital that her husband had died.

“That was probably the hardest thing I’ve ever had to do,” the chief said.

Friday’s shooting comes after a sharp increase last year in the number of police officers killed in the line of duty — including a pair of deadly ambushes in Louisiana and Texas.

On Wednesday, authorities arrested a man accused of fatally shooting an Orlando, Florida, police officer outside a Wal-Mart on Jan. 9.