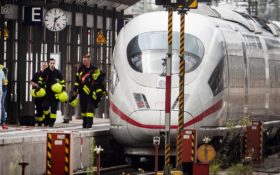 An 8-year-old boy was run over by a train and killed at Frankfurt’s main station on Monday after a man pushed him and his mother onto the tracks, German police said.

The mother and then the boy were pushed onto the tracks as a high-speed ICE train was pulling into the station, one of Germany’s busiest. The mother was able to escape but the boy was hit and run over by the train and suffered fatal injuries.

The suspect then apparently tried unsuccessfully to push another person onto the track, police said.

Sponsored: Biblical DNA – do you have it?

The 40-year-old suspect fled the scene with passers-by in pursuit and was arrested near the station. He was being questioned and there was no immediate information on his possible motive.

Police spokeswoman Isabell Neumann said there appeared to be no connection between the suspect and the victims.

The boy’s mother was taken to a hospital and also was being questioned. There was no immediate information on her injuries.

Police said that the suspect is an Eritrean citizen but did not immediately release further information.

Interior Minister Horst Seehofer issued a statement condemning “this appalling act in the strongest terms” and cautioning against drawing conclusions before more is known.

Seehofer said that in view of “several serious crimes” recently, he would interrupt his vacation and meet the heads of security authorities Tuesday.

He didn’t specify what he was referring to, but Monday’s incident followed a case earlier this month in which a 34-year-old woman was pushed in front of a train and killed in Voerde in northern Germany. The suspect in that case, a German-born Serb, is in custody.