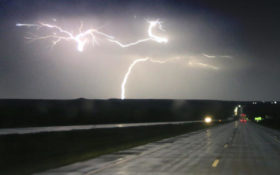 Authorities in Florida say lightning struck a motorcyclist on a Florida interstate, causing a crash and his death.

The Florida Highway Patrol tells news outlets the lightning strike hit the driver Sunday afternoon as he rode southbound on Interstate 95, cracking the 45-year-old’s now-burning helmet and sending him off the roadway.

He was pronounced dead at the scene in east-central Florida. Florida troopers say an off-duty Virginia state trooper witnessed the lightning strike and its aftermath.