[Tragedy] Spouse of legendary author passes away - The Horn News 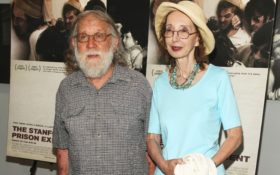 Charles Gross, a longtime Princeton professor of neuroscience and husband to author Joyce Carol Oates, has died. He was 83.

Oates said in an email Gross died from cancer Saturday in Oakland, California.

She shared an image of him hiking in a lush green forest on Twitter and remembered him as her “brilliant, beautiful, beloved husband.”

Gross spent 43 years on the faculty of Princeton’s psychology department where the university credited him with revolutionizing understanding of sensory processing and pattern recognition. Princeton called his work “foundational to the field of cognitive neuroscience” when he retired in 2013.

Oates, who chronicled her grief over her first husband’s death in 2011′s “A Widow’s Story,” wed Gross in 2009. Oates taught creative writing at Princeton until 2014.

Gross was famed for his backyard pig roasts and canoe trips.

He is survived by Oates, his daughters Melanie Hagen and Rowena Gross, and grandsons Noah and Sam Hagen.