(Tragedy) Postman gunned down on mail route - The Horn News 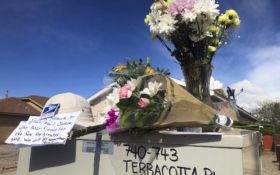 An on-duty mail carrier for the Postal Service was shot and killed in a New Mexico neighborhood after intervening in a dispute between a 17-year-old and his mother, police said Tuesday.

Authorities in Albuquerque were searching for suspect Xavier Zamora, who was accused of murder in a criminal complaint that says he shot the mail carrier Monday in the stomach.

The Postal Service identified Jose Hernandez as the victim, saying he was a 12-year employee.

“This is something that is completely unexpected,” said Rod Spurgeon, a spokesman for the Postal Service.

Mayor Tim Keller said in a statement the shooting had shaken the city, where more than two dozen homicides have occurred since the start of the year.

“The men and women who carry our mail day-in and day-out are public servants in every sense of the word,” Keller said. “We know we must, and will continue to, fight against the gun violence that has taken a terrible toll on our community.”

Federal authorities have taken over the investigation because Hernandez was killed on his job as a federal worker.

Spurgeon referred questions about the investigation to the U.S. attorney’s office, which did not immediately respond to requests for comment.

Hernandez was shot in the afternoon in front of Zamora’s residence on the southwest side of the city.

The suspect’s mother, Roxanne Zamora, told police that her son became aggressive with Hernandez after he tried to help diffuse the domestic dispute, prompting the mail carrier to use pepper spray on the teen, according to the criminal complaint.

Xavier Zamora went into the house after the encounter then returned a short time later, shot Hernandez and ran back into the house, the mother said.

SWAT officers secured the neighborhood during an hours-long standoff at the house, believing Zamora might still be inside.

None of the witnesses who were in front of the home with Hernandez after the shooting reported seeing Zamora leave the home, police said.