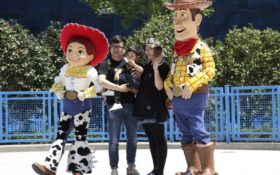 Walt Disney Co. used the expansion of its $5.5 billion Disney Resort in Shanghai on Thursday to highlight its deep China connections despite worsening trade tensions between Washington and Beijing.

Beneath the surface, Shanghai’s Disneyland is not purely American and has been a boon to the local economy, providing both jobs and high-quality entertainment, company executives said.

Disney took an unusually collaborative approach to its Shanghai theme park, which opened in 2016, handing over a 57 percent ownership stake to its state-owned Chinese partner, the Shanghai Shendi Group.

“We’re excited about the fact that we’re not an American company just here by ourselves. We’re a real collaborative company,” Bob Weis, president of Walt Disney Imagineering, which oversaw construction of the park, said in an interview. “So far we see that collaboration as being viewed by our partners in government as a real positive aspect of Shanghai Disneyland.”

He added that the “overwhelming majority” of artists and designers who built the Toy Story Land extension of the park are part of Disney’s local Chinese team.

“We’re a local company,” Weis said. “Everything here is built and made in China.”

Foreign businesses in China bear significant political risk. In the past, political tensions have prompted protests and boycotts of South Korean, Japanese and U.S. businesses on the mainland.

“I want to thank the people of China for wholeheartedly embracing this resort, for truly making it your own,” Disney chief executive Robert Iger told an array of Shanghai government dignitaries, company officials and media at the colorful, confetti-laced launch of Toy Story Land. “We look forward to a future of continued partnership.”