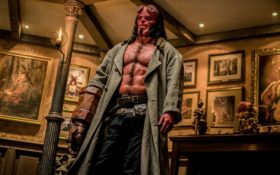 A Tennessee movie theater that sits across from a church and next to an elementary school is promoting the latest movie in the “Hellboy” franchise as “Heckboy.”

The Tennessean reports the PG advertisement at the Dickson theater has caused a local buzz around the $50 million movie, which grossed $19.8 million in its first two weekends.

Manager Belinda Daniel says the theater avoids putting up words on its sign that may be seen as profanity. She says they want to be respectful to everyone, including the hundreds of children who pass by every day. But she says the response to the theater’s play on words has been more exciting than expected.

She says she’s glad the sign shared the community’s personality and incited some laughs.