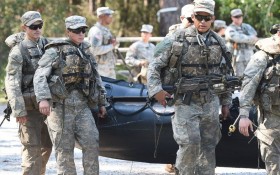 The two women have become the first ever females to complete the grueling combat training program known as Ranger School, one of the militaries hardest training schools.

Though most of the military’s approximately 1,000 occupations are open to women, some of the direct combat roles like infantry remain closed to them. Seeing if women could pass the strict physical standards was seen as an important, though still controversial, milestone towards opening them.

The Army’s Ranger headquarters in Fort Benning, Georgia, says the women and 94 men passed the tough 62-day course that tests their ability to overcome fatigue, hunger and stress during combat operations.

“Each Ranger School graduate has shown the physical and mental toughness to successfully lead organizations at any level,” Army Secretary John McHugh said in a statement. “This course has proven that every soldier, regardless of gender, can achieve his or her full potential.”

“We owe soldiers the opportunity to serve successfully in any position where they are qualified and capable,” he added.

The 62-day Ranger school includes three phases, each in a different part of the country: wooded areas of Fort Benning, the Appalachian mountains of north Georgia, and swamps in Florida.