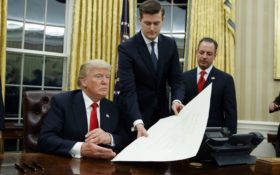 One of President Donald Trump’s top White House aides resigned Wednesday following allegations of domestic abuse leveled against him by his two ex-wives.

Staff secretary Rob Porter said in a written statement that allegations that became public this week are “outrageous” and “simply false.” Porter said photos published of his former spouses — in which one appears to have a black eye — were “given to the media nearly 15 years ago and the reality behind them is nowhere close to what is being described.”

Porter added in a written statement. “I have been transparent and truthful about these vile claims, but I will not further engage publicly with a coordinated smear campaign.” Porter said he will leave the White House after a transition period.

Porter’s former wives recounted physical, verbal and emotional abuse they say he subjected them to during their marriages.

Porter’s first wife, Colbie Holderness, told the DailyMail.com that Porter choked and punched her during the five years they were husband and wife.

Porter’s second wife, Jennifer Willoughby, also described for the DailyMail.com how Porter once dragged her naked and wet from the shower to yell at her. She filed a protective order against him. Stories published online by the DailyMail.com included photos of Holderness with a bruised eye socket that she said she suffered after Porter punched her in the face while on vacation in Italy.

A top White House aide is stepping down following allegations of domestic abuse by his two ex-wives. The White House press secretary read part of staff secretary Rob Porter’s statement, in which he claims the allegations are “simply false.”

Neither Holderness nor Willoughby could be reached for comment Wednesday. Telephone messages left by The Associated Press were not returned.

Porter, 40, has been credited with working with White House chief of staff John Kelly to control the flow of information to the president. His influence growing in recent months, Porter was often seen with Trump when the president traveled and as he signed legislation or proclamations. He helped craft Trump’s well-received State of the Union address and was credited internally for helping bridge divides in a White House riven by rivalries and for helping more effectively roll out new policy.

The DailyMail.com published a statement from Kelly referring to Porter as a “man of true integrity and honor,” adding, “I can’t say enough good things about him.”

“He is a friend, a confidante and a trusted professional. I am proud to serve alongside him,” Kelly added.

Porter, well-liked throughout the White House, lost internal support once the photos came out. But even then, Kelly was urging him to stay, according to a White House official who spoke on condition of anonymity to convey internal discussions.

“I was shocked by the new allegations released today against Rob Porter. There is no place for domestic violence in our society,” Kelly said. ” I stand by my previous comments of the Rob Porter that I have come to know since becoming Chief of Staff, and believe every individual deserves the right to defend their reputation.” It’s unclear what new allegations Kelly was referring to.

White House press secretary Sarah Huckabee Sanders said she had not discussed the allegations against Porter with Trump. She said Porter was not pressured to resign.

“Rob Porter has been effective in his role as staff secretary,” Sanders said. “The president and chief of staff have full confidence in his abilities and his performance.”

Vice President Mike Pence, asked about the resignation while traveling in Japan, told reporters he learned of it from news reports. “We’ll comment on any issues affecting White House staff when we get back to Washington,” he said.

Hatch released a statement that said he was “heartbroken” over the allegations and denounced domestic violence.

“In every interaction I’ve had with Rob, he has been courteous, professional, and respectful. My staff loved him and he was a trusted advisor,” Hatch said. “I do not know the details of Rob’s personal life. Domestic violence in any form is abhorrent and unacceptable.”

Porter, who joined the administration at its start in January 2017, said in his statement: “My commitment to public service speaks for itself. I have always put duty to country first and treated others with respect. I am deeply grateful for the opportunity to have served in the Trump Administration and will seek to ensure a smooth transition when I leave the White House.”