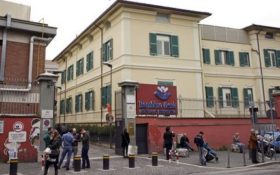 The scandal was remarkable even by Vatican standards: The president of the “pope’s hospital” for sick children had taken nearly a half-million dollars in hospital donations and used them to spruce up the penthouse apartment of the Vatican cardinal who had appointed him.

On Thursday, the Vatican tribunal indicted Giuseppe Profiti and the hospital’s former treasurer on charges they illegally diverted the money, and ordered them to stand trial. The case answers a key question raised by a recent Associated Press investigation that found that the hospital’s mission under Profiti’s leadership had been lost and was “more aimed at profit than caring for children.”

So where did the money go?

According to the indictment, at least some 422,000 euros ($481,000) in donations to the fundraising foundation of the Bambino Gesu Pediatric Hospital – popularly known as the “pope’s hospital” – went instead to renovate the penthouse of Cardinal Tarcisio Bertone, who retired in 2013 as the second most powerful man in the Catholic Church.

Profiti acknowledged the payment, but said it was an investment so the hospital could use Bertone’s apartment, with its enormous rooftop terrace overlooking St. Peter’s Basilica and the Vatican gardens below, for fundraising events to benefit sick children.

Bertone, who had appointed Profiti as president of the hospital in 2008, denied knowledge of the payment and said he had paid some 300,000 euros for the renovations out of his own pocket. That suggested the construction company was either paid twice for the work or that Bertone paid for some of it, and the hospital foundation the rest.

Regardless, the total payout came to nearly three-quarters of a million euros (dollars) to renovate a retired cardinal’s apartment and the leaky rooftop terrace above it, all in the shadow of the two-room hotel suite where Pope Francis lives and preaches his “church of the poor and for the poor” gospel.

Significantly, Bertone wasn’t charged or even placed under investigation, even though he personally benefited from the diverted money. Nor were the Castelli Re construction company or its owner, Gianantonio Bandera, though Bandera was referenced as having received the “illegally” diverted funds. The trial of Profiti and Massimo Spina, the former hospital treasurer, is scheduled to open on Tuesday.

The apartment is owned by the Vatican, but was assigned to Bertone for his personal use after he retired as the Vatican’s secretary of state under Pope Benedict XVI. Located on the edge of the Vatican gardens next to the Domus Santa Marta hotel where Pope Francis lives, the third-floor apartment has been the source of endless speculation ever since the diverted hospital funds were revealed in 2015.

Bertone has defended its relatively large size – some 3,230 square feet (300 square meters) – by saying other cardinals have even bigger apartments and that he lives there with a secretary and three nuns who help care for him, and that he needed the space for his archive and library.

While denying any wrongdoing, Bertone nevertheless made a 150,000-euro “donation” to the hospital, whose name in English means Baby Jesus, to make up for the reputational damage it incurred as a result of the scandal.

Profiti resigned suddenly as president of the hospital in January 2015, nine months into a new three-year term. According to the AP investigation, a secret Vatican-authorized task force had concluded in 2014 that under his administration, the hospital’s mission had been “lost” and was “substituted by an attitude aimed almost exclusively at profit.”

The AP inquiry found that children sometimes paid the price as the medical center expanded its specialized services, increased volume and tried to cut costs, with overcrowding and poor hygiene contributing to deadly infections. One extremely drug-resistant superbug outbreak that wore on for nearly two years killed eight children in the hospital’s cancer ward.

The hospital has called the AP report a “hoax” and denied problems. The current Vatican secretary of state, Cardinal Pietro Parolin, has said some issues were “truly unfounded” but acknowledged there were past problems at the hospital that the current administration was working to fix.

Profiti, who now heads a small medical clinic in southern Campania, said in a May 29 interview that he told Vatican prosecutors that none of the money used for the renovations had been intended for the health care of children. He laughed when told of the results of the 2014 Vatican-authorized task force investigation and called it “rumor.”

Profiti was not in his office on Thursday, a secretary said, and he didn’t respond to an email seeking comment. Through his lawyer, Bertone declined to comment out of respect for the Vatican judiciary.

Sponsored: What Obama REALLY did on January 19th (unbelievable!)

After the task force turned in the results of its three-month investigation in April 2014, the Vatican ordered a second in-house clinical assessment into childcare at the hospital. After a three-day visit in early 2015, that investigation found the hospital in many ways was “best in class.”

At the same time, a Vatican-ordered external audit by PricewaterhouseCoopers confirmed that the hospital’s mission had been “modified in the last few years” to focus on expansion and commercial activities without sufficient governance controls.

The audit, portions of which were obtained by the AP, flagged particular problems with the fundraising foundation, which Profiti headed. PwC found that five years after it was created, the foundation still didn’t have an executive committee, audit board or organizational model as called for by its statutes. Its operating costs in 2012 included 145,000 euros in compensation to its board, of which 109,000 euros was paid in cash to its general secretariat.

The audit also found that the foundation paid 24,000 euros to rent a helicopter to ferry Bertone to a hospital-related opening in southern Italy, and recommended that the hospital define policies about what types of expenses could be allowed and how much cash to have on hand.

Flagging the problems as requiring immediate action, PwC suggested that the hospital revamp the board and appoint an executive committee “considering the not-for-profit mission of the Bambino Gesu foundation and the reputational risk associated to its activities for … the Holy See.”

The audit and details of the funds diverted for the Bertone apartment renovation were first revealed in a 2015 book, “Avarice,” by Italian investigative journalist Emiliano Fittipaldi.

Fittipaldi and another Italian journalist were subsequently put on trial at the Vatican for having obtained leaked documents. The court ultimately ruled it had no jurisdiction to prosecute them.

In an email to AP on Thursday, Fittipaldi said it “seemed strange” that Bertone wasn’t even placed under investigation in the case, given that letters published in his L’Espresso magazine show that Bertone was well aware the foundation was interested in renovating the apartment. However, in the letter exchange, Bertone also made clear he didn’t want the foundation to pay for the construction.

“I’m just sorry that Bertone was allowed to stay in his penthouse, while the journalist who discovered the scandal ended up on trial,” Fittipaldi said. “Different standards for different people.”