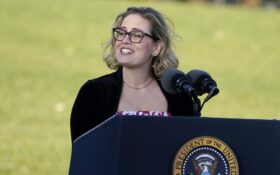 On Tuesday, President Joe Biden traveled to a computer chip manufacturing plant in Arizona. As always, he invited the state’s congressional Democrats for a ride on Air Force One.

The White House made excuses for Sinema’s absence. They gave a milquetoast answer about Sinema’s busy schedule. Meanwhile, Sinema has become known for keeping a light schedule. She reportedly failed to hold any town halls from 2018 through 2021.

“So, we always invite — as you know,” Jean-Pierre said. “When we go to a state, the President is always happy to give those congressional members in that state a ride on Air Force One to the state. And, clearly, if you think about the CHIPS and Science Act, it was a bipartisan piece of legislation. It got a lot of support from Democrats. I can’t speak to Senator Sinema’s schedule. As you know, the Senate is in session, so I would have to refer you to her office as to her schedule for today.”

One outlet ran a headline raising the possibility of a party switch. “Biden Gets Snubbed by Key Democrat Amid Speculation of a Party Switch,” it said.

Sinema received national attention earlier this year during negotiations for the “Inflation Reduction Act.” Sinema voted for the bill only after removing its proposed tax on investors.

During the Biden presidency, Sinema has become known for making deals with Republicans. She was approached by several Republicans during the negotiations for the “Inflation Reduction Act.” In fact, she reportedly nixed the investor tax after speaking about it with Senate Minority Whip John Thune, R-S.D.

Meanwhile, Sinema has maintained a distant relationship with other Democrats. For example, she has yet to propose a tax plan with fellow Arizona Sen. Mark Kelly, a vulnerable Democrat re-elected narrowly last month. More to the point, she also snubbed Biden.

However, Sinema looks unlikely to switch parties, given her liberal views on immigration. As of Wednesday, she’s been brokering a “bipartisan” agreement to forge a path to citizenship for illegal immigrants brought to the U.S. as children, insiders told Fox News.