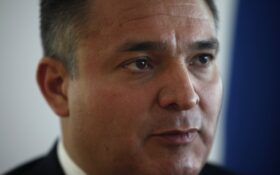 Former top Mexican security official Genaro Garcia Luna pleaded not guilty on Wednesday to drug trafficking charges, including a new one of engaging in a continuing criminal enterprise that could add 20 years to his sentence if convicted.

In a hearing by video, to which reporters had access by phone, U.S. District Judge Brian Cogan read all charges to Garcia Luna. The new charge, added in July, involves violations of trafficking 5,000 kilos of cocaine in 2008; 23,000 kilos in 2007 and 19,000 kilos that same year. The judge mentioned three other cocaine deals in 2002 and 2003.

Garcia served as Mexico’s Secretary of Public Security from 2006 to 2012. He is accused of accepting tens of millions of dollars in bribes — often stuffed in briefcases full of cash — to shield the Sinaloa cartel from law enforcement.

In January, the former Mexican official pleaded not guilty to charges of cocaine trafficking conspiracy and a false statement.

On Wednesday, Cogan set Dec. 7 as the next hearing on the case. Prosecutors have said Garcia Luna’s trial could last from two to three months.

Garcia Luna lived in Miami before his arrest in 2019 in Texas.