Nancy Pelosi attacked by something unexpected - The Horn News 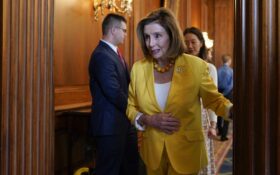 House Speaker Nancy Pelosi has polarized the American people for more than a decade. She’s earned scathing rebukes from downballot Democrats running close races and hoping to distance themselves from her.

But one candidate just escalated in an unexpected way.

Matt Castelli — a veterans’ activist and a former CIA officer — is running for the House to represent upstate New York. Despite running as a Democrat, he called Pelosi an “authoritarian.”

“I’m not going to let a traitor like Elise Stefanik smear me or any other patriot,” Castelli said. “When you sell out your country, our Constitution, our democracy, just to boost your career, that’s the very definition of a traitor.”

Castelli defended his inflammatory choice of words… and then he directed it at his own party.

“I don’t throw the use of the word ‘traitor’ around lightly. I do agree that sometimes we need to tone down the sort of dynamic of professional wrestling that our politics has turned into, you know, one side versus the other. And as I’m willing to call out members of my own party when I think that they’re wrong,” he said. “Listen, I think Pelosi is an authoritarian, and I’m not going to support her for another term as speaker. I think she breaks her promises, she tries to rule by division, and we need somebody who’s going to bring folks together. I’m going to call it like it is.”

Castelli later explained his rationale for pledging to vote against Pelosi. He wants a more moderate, unifying Speaker.

“The answer to the far left of the Squad and Nancy Pelosi isn’t the far right. I think it’s stronger moderate voices,” Castelli said. “What I hear from folks is we need a moderate we need someone who’s going to bring us together to solve problems, not create more of them.”

Stefanik’s office didn’t buy it. Stefanik herself called Pelosi a “radical authoritarian Speaker” on Twitter in July, and a spokesperson accused Castelli of becoming desperate and parroting Stefanik.

“Matt Castelli tried to hide the endorsement of gun-grabbing governor Kathy Hochul on his website… He then admitted that he will vote for Hochul in November,” the spokesperson told Fox News Digital on Wednesday.

In the radio interview, Castelli confirmed his support for Hochul, but he also claimed to “take issue” with her executive order on firearms.

Stefanik’s office continued, “Now, he is mimicking Elise’s talking point that Nancy Pelosi is an authoritarian… His desperate campaign is failing and going nowhere, the DCCC has written him off as yet another Democrat who will lose by double digits to Elise Stefanik.”

Castelli responded with its own statement. He claims to have held this opinion of Pelosi for a long time.

“I have consistently stated that I will not be supporting Speaker Pelosi for another term as speaker,” Castelli told Fox News Digital. “It’s time for new leadership in the Democratic Party and in Congress, especially for NY-21 – which is why voters are planning to fire Elise Stefanik this November.”

Castelli and Stefanik are apparently competing to see who hates Pelosi more.

In any case, Pelosi expressly intends to resign from party leadership in the next term. Pelosi told reporters last year, “I made the agreement, and it is my intention to abide by it.”

Pelosi is running for reelection to the House. If she keeps her promise, she’ll likely become a rank-and-file member of Congress, instead of a House speaker or a House minority leader.

Stefanik is running for a sixth term in the House. Having won her last election by more than 10 points, she’s favored to beat Castelli.