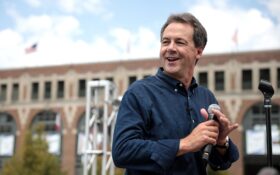 A high ranking official in the state’s Democratic Party said some pretty rotten things in the past — about women, minorities, law enforcement, and even supported violent riots in America.

Over the weekend, the ugly tweets were unearthed from his social media account.

Jacob Hamblin, who serves as the organizing director for the Democratic Party of Montana, is under fire for degrading the Asian community. His 2010 message suggested that he couldn’t tell the difference between Asian people.

He once wrote in the now-deleted tweet, “In the library and saw this korean forigen [sic] exchange student who lives on my floor as I went to say hi realized it wasnt him..damn asains [sic] … ”

Earlier that same year he went after women, comparing their brains to the size of a small rodent. He made the comment when he was asked if he’d rather be a woman …

And his response, according to Washington Free Beacon, was, “And have the brain the size of a squirrel? Count me out… ”

The newly revealed messages — including the verbal attack on law enforcement — come at a time when Democrats across the country have proposed defunding the police.

Hamblin’s past tweets have resurfaced right on the heels of another controversy — a staff member of Democratic Gov. Steve Bullock’s Senate campaign was recently fired for racist, sexist and homophobic tweets.

The governor himself has been accused of siding with the liberal mob by local conservative leaders in his home state.

With Hamblin’s comments revealed, it seems Democrats in the state are in real trouble.