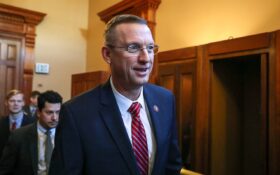 House Speaker Nancy Pelosi tried to a power play by teasing the 25th Amendment to remove President Donald Trump from office ahead of the 2020 election.

She cited Trump’s mental fitness and claimed he may not be fit to serve following his bout with the coronavirus.

But a top GOP congressman — Rep. Doug Collins, D-Ga. — has turned the tables not only on the Democratic leader on Capitol Hill.

And it wasn’t just her. He also hit establishment Democrats with just weeks until the presidential election.

Collins introduced a measure that would remove Pelosi from her position as House Speaker.

It's clear that Nancy Pelosi does not have the mental fitness to serve as Speaker of the House of Representatives.

I'm introducing a resolution to push for her removal.

Collins said Pelosi wasted lawmakers’ time with a bogus presidential impeachment effort, hit her for ripping up Trump’s State of the Union speech, for violating her own COVID-19 mask wearing protocols during her infamous salon visit, and he cited an overall decline in her mental fitness.

He went after the Democratic Party in general.

Amid liberal calls to pack the Supreme Court with an increasing amount of seats to counter Supreme Court nominee Amy Coney Barrett, Collins proposed a constitutional amendment of his own.

Fox News that, under the proposed amendment, there would be no additional seats until 10 years after the passing of any legislation that would add seats to the court.

In other words, if Democrats wanted to pack the Supreme Court and add a seat today, even if a 10th seat was approved, the Senate and president have to wait until 2030 to fill the seat.

This would ensure that a full maximum presidential term has been carried out, and there are no partisan political bias for adding additional seats.

The amendment comes after House Judiciary Committee Chairman Jerrold Nadler, D-N.Y., called for the incoming Senate to “move to expand the Supreme Court.”