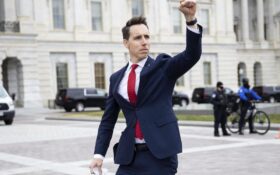 When the COVID-19 pandemic shut the nation down, former President Donald Trump delivered “Trump Checks” to Americans as soon as possible.

The “Parent Tax Credit” is designed to help Americans who simply want the resources to start a family, according to the Missouri senator.

“American families should be supported, no matter how they choose to care for their kids,” Hawley said in a released statement. “Starting a family and raising children should not be a privilege only reserved for the wealthy. Millions of working people want to start a family and would like to care for their children at home, but current policies do not respect these preferences.”

Recipients will be able to either receive the payments in a lump sum, or monthly stipends. This would mean $500 a month for single parents, and $1,000 a month for married parents.

The qualifying measures are simple.

Both single and married parents have to earn up to $7,450 annually or work up to 20 hours a week on the federal wage level. Recipients must also have a child younger than the age of 13.

According to Insider, Hawley is one of a few Republicans making a push to increase federal spending on families.

Sen. Mitt Romney, R-Utah introduced a similar plan with monthly payments, but other members of the Republican Party spoke out against the proposal.

Some experts say the bill may also hurt those who experience loss of income during a recession.

We need a plan to help working parents that is pro-family and pro-work. I’ll be proposing legislation this coming week that gives a major tax cut to working parents to help them afford to start a family and raise their kids https://t.co/gbZXxXI58T