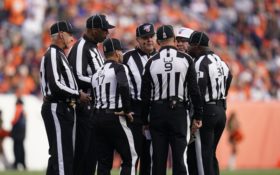 A Republican on the U.S. House Committee for Oversight and Reform blasted Democrats on Thursday for their investigation into the NFL’s Washington Commanders.

James Comer of Kentucky in a letter to Democratic committee chairwoman Carolyn B. Maloney called the investigation into the team’s workplace culture and business dealings a sham that is wasting taxpayer resources.

“The primary mission of the House Oversight and Reform Committee is to root out waste, fraud, abuse and mismanagement in the federal government,” Comer wrote.

“Unfortunately, your so-called “investigation” into the Washington Commanders lacks even any foundation for exercising congressional oversight authority.”

The committee last week referred the case to the Federal Trade Commission citing evidence the team may have engaged in potentially unlawful financial conduct.

The Commanders wrote to the FTC on Monday denying allegations made by a former employee and citing documents to refute his claims.

Comer sided with the Commanders and said the committee had taken a “one-sided approach” by relying on the testimony of longtime vice president of sales Jason Friedman.

He also called the investigation an attempt to distract the public.

“Your reckless, ends-oriented investigation is an embarrassment to our committee and a misuse of congressional oversight authority,” Comer wrote. “It is yet another example of Democrats exceeding the bounds of what is permissible for Congress to investigate.”

Owner Dan Snyder has long been a Republican donor. Separate from the Congressional investigation, which began after the NFL did not release a report of an investigation into the team’s workplace culture, the Commanders are in the midst of a lengthy search for a site for their new stadium with Maryland, Virginia and the District of Columbia all potential options.