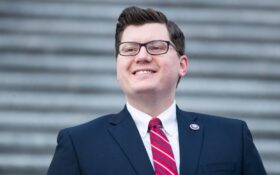 A federal court jury convicted a Kansas man who insisted that a death threat he made against U.S. Rep. Jake LaTurner was a message from God, amid what authorities have said is a sharp rise in threats against members of Congress and their families.

Jurors found Chase Neill, 32, of Lawrence, guilty of a single count of threatening a U.S. government official. The presiding judge instructed jurors that to find Neill guilty, they had to conclude that a reasonable person would find that he had made a true threat and intended to either intimidate LaTurner or interfere with his work as a Republican congressman representing eastern Kansas.

Neill acted as his own attorney and cross-examined LaTurner on the witness stand Wednesday. Neill testified Thursday that he was a messenger from God and he passed along a message from God threatening LaTurner for ignoring concerns about sorcery, wizards, extraterrestrials and a war for people’s souls.

Federal prosecutors said Neill fixated on LaTurner before leaving an after-hours voicemail June 5 with the congressman’s Topeka office that included, “I will kill you.” LaTurner testified that he worried about his family’s and staff’s safety and beefed up security at his home and Topeka office.

“You cannot cloak yourself in religious belief and justify such a threat,” federal prosecutor Stephen Hunting said in his closing remarks. “There is a line you cannot cross.”

Neill sat calmly as U.S. District Judge Holly Teeter read the jury’s verdict, which came after about two hours of deliberation. He politely declined to have the jury polled and, when asked whether he had more about the case to discuss, he said calmly, “No, your honor.”

As a marshal handcuffed him, his mother, Pamela Neill, who had watched the three-day trial, told him, “I love you.”

The judge had Neill give his testimony Thursday as a narrative from the witness stand because he was representing himself. Neill reportedly began acting as his own lawyer due to his discontent with his two public defenders.

Neill interrupted his comments to make sure documents were projected onto four big screens on a wall behind him and to confer with the judge and prosecutors about what evidence would be allowed. Prosecutors did not cross-examine him.

Neill admitted in court that he left the June 5 voicemail and others with more death threats the next day. But he said he was conveying a message from God that LaTurner and other officials faced death by an act of God, such as a tornado or hurricane, for attacking God’s creation.

“This is not me saying, ‘I’m going to chase you down with a knife,’ or something like that,” Neill said in his closing argument.

His mother, fighting back tears, told reporters upon leaving the courtroom, “He never raised a hand on anybody.”

Neill was discussing aliens and black magic during his time in the courtroom, according to Fox News, but he was apparently found competent.

Threats against members of Congress have increased in the last two years. In October, an intruder severely beat former U.S. House Speaker Nancy Pelosi’s husband with a hammer in their San Francisco home. Last year, a man carried zip-ties to the home of Supreme Court Justice Brett Kavanaugh.

Local school board members and election workers across the nation also have endured harassment and threats. Police in Albuquerque, New Mexico, this week arrested a failed Republican legislative candidate over a series of shootings targeting elected Democratic officials’ homes or offices.

Some attackers are politically motivated. Others are simply sadistic.

Hunting told jurors that it was reasonable for LaTurner and his staff to take Neill’s words seriously as threats.

LaTurner said in a statement after the verdict: “Violence and threats of violence have no place in our society.”

Take a look at Neill’s mugshot —

A federal jury convicted a Kansas man on Thursday after he admitted in court that he threatened to kill U.S. Rep. Jake LaTurner. https://t.co/sQ1TN1ZGPR pic.twitter.com/iSEhuow5f2

Neill said his concerns about a war for souls were sparked by a May 13 story on the Kansas Reflector news site about a legislative debate in which a western Kansas lawmaker urged colleagues to override Democratic Gov. Laura Kelly’s veto of a measure that would have restricted public health officials’ power in epidemics following the COVID-19 pandemic.

Republican state Rep. Tatum Lee was quoted as saying, “The war is real you all. We are fighting for the soul of our nation.”

Neill told jurors he values his soul and was required by God to act when he “heard the sound of the trumpet.”

He also showed jurors a LinkedIn page for himself, saying he dealt with “matters concerning over 400 million lives lost with high sorcery.”

Neill testified that in 2018, “God came to me very directly,” without elaborating. A U.S. magistrate judge said in an August order refusing to release Neill from custody that Neill had suffered a head injury four or five years ago “characterized as a head fracture.”

But the trial judge concluded last month that Neill was capable of following what goes on in court and assisting his lawyers, making him mentally competent to stand trial. She granted his request to act as his own attorney, starting Wednesday.

“I’m really trying to explain how I interact with God, and it’s a difficult explanation,” Neill told jurors during his testimony Thursday. “I apologize.”