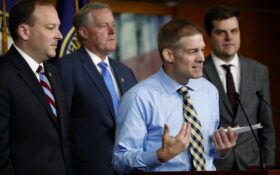 Rep. Matt Gaetz, R-Fla., is one of the most well-known faces on the House floor.

Many considered him a rising star within the Republican party for his outspoken support of former President Donald Trump and his star role in Trump’s impeachment defense.

His effort has earned him some public standing among political pundits and voters.

But he may be about to give all of that up.

According to reports, Gaetz is considering retiring from Congress early.

And instead, he’d be joining Fox News’ biggest rival: Newsmax.

Axios reported that Gaetz has spoken to three confidants about becoming a media figure. Should he decide to run with the network, it’d be at a time when the station is garnering serious attention. Millions of conservative viewers flocked to the network after becoming dissatisfied with Fox News and its handling of the 2020 election results.

The Trump ally would no doubt contribute to the popularity rise the network has seen post-election.

Earlier this year, Gaetz also made a name for himself by challenging fellow GOP Rep. Liz. Cheney, R-Wyo., after she voted to impeach Trump.

Gaetz even went as far as traveling to Cheney’s home state in a rally to oust her from her seat.

“We are in a battle for the soul of the Republican Party, and I intend to win it,” Gaetz said.

Gaetz has made clear his track record of supporting the Trump wing of the Republican party — something his voters nor conservative viewers will forget.

A source, according to The Hill, said that Gaetz believes having a role at Newsmax could amplify his chances for a bigger political role in the future.