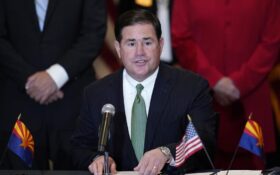 Arizona Gov. Doug Ducey arrived in Taiwan on Tuesday for a visit focused on semiconductors, the critical chips that are used in everyday electronics and have become a battleground in the technology competition between the U.S. and China.

His visit is the latest in a recent string by U.S. politicians that have angered China, which claims the self-governing island off its coast as part of its territory and says the visits encourage Taiwan independence forces.

Ducey is on a mission to woo suppliers for the new $12 billion Taiwan Semiconductor Manufacturing Corp. (TSMC) plant being built in his state. He is traveling with the Arizona Chamber of Commerce president and the head of the state’s economic development agency.

He will meet with Taiwan President Tsai Ing-wen, business leaders and university representatives in the semiconductor industry, Taiwan’s Ministry of Foreign Affairs said in a statement.

American states are competing to attract a multibillion-dollar wave of investment in chip factories as the U.S. government steps up spending on expanding the U.S. semiconductor industry with a recently passed law. Last week, the Indiana governor visited Taiwan for a similar purpose.

Taiwan produces more than half the global supply of high-end processor chips.

U.S. officials worry that the United States relies too heavily on Taiwan and other Asian suppliers for processor chips used in smartphones, medical devices, cars and most other electronic devices.

Those worries have been aggravated by tensions with China over technology and security. The potential for disruption was highlighted by chip shortages due to the coronavirus pandemic that sent shockwaves through the auto and electronics industries.

Beijing fired missiles into the sea near the island starting on Aug. 4 after U.S. House Speaker Nancy Pelosi visited, disrupting shipping and air traffic, and highlighting the possibility that chip exports might be interrupted.

A law approved by Congress on July 29 promises more than $52 billion in grants and other aid to develop the U.S. semiconductor industry and a 25% tax credit for investors in chip factories in the United States.

Intel Corp., the only major U.S. producer, announced plans in March 2021 to build two chip factories in Arizona at a cost of $20 billion. The company has had another facility in Arizona since 1980.

In January, Intel announced plans to invest $20 billion in a chip factory in Ohio.

TSMC., headquartered in Taiwan and which makes chips for Apple Inc. and other customers, announced plans last year to invest $3.5 billion in its second U.S. manufacturing site in North Phoenix, Arizona.

South Korea’s Samsung Electronics says it will break ground in 2024 for a $17 billion chip factory near Austin, Texas. The state says it is the biggest single investment to date in Texas.