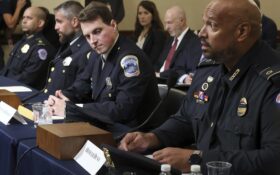 On Wednesday, police said they received a false report about a person shot at the Georgia home of Rep. Marjorie Taylor Greene. Naturally, armed police apparently rushed to Greene’s door in the middle of the night — a potentially deadly prank called “swatting”, having the SWAT team storm someone’s home.

Local police described the call as “a second false report,” they said in a statement obtained by Northwest Georgian News.

The phony call “was received on what appeared to be a suicide crisis line from an internet chat,” the police continued.

“Swatting” is dangerous because police are on alert — and the victim is unexpecting, and may momentarialy think the police are instead thieves. It can be prosecuted as a federal crime, and states can impose even heavier penalties.

Social media critics of Green were incredulous, despite confirmation from the local authorities. They accused Greene of falsely calling the police on herself for attention. One user even compared Greene to Jussie Smollett, the actor known for falsifying a hate crime against himself.

Sounds like someone just wants attention. No one even does this anymore

According to CNN, Rome Police assistant chief Debbie Burnett said that the 911 operator had received a second call about the motives for the false report.

The hoaxer reportedly “was using a computer generated voice stating that he/she was upset about Mrs. Greene’s political view on transgender youth rights.”

Earlier this month, Greene introduced a bill making it a felony to perform medical transitions on minors. The bill looks very unlikely to pass.

The U.S. Capitol Police is working with local police in Rome, Georgia, CNN reported. The Capitol Police have hesitated to release any additional information about this ongoing case.

From 2020 to 2021, Capitol police reported a 107 percent increase in threats against lawmakers.

On Aug. 25, 2022 at about 2:53 a.m., Rome Police officers responded to a second ‘swatting’ call at the residence of Marjorie Taylor Greene. This call was received on what appeared to be a suicide crisis line from an Internet chat. Officers responded once again to Mrs. Greene’s home and confirmed this was a second false report. The Rome Police Department Criminal Investigation Division is working in conjunction with the Capitol Police on this investigation. This is an active investigation and no further information can be released at this time.