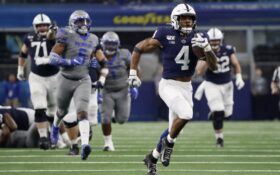 Penn State running back Journey Brown says he has a heart condition that is forcing him to give up football.

Brown posted Wednesday night on Twitter that he has hypertrophic cardiomyopathy, a disease that causes heart muscle to become abnormally thick and can make it more difficult to pump blood.

Penn State coach James Franklin told reporters Brown’s condition was not COVID-19 related, but it was discovered in September during “a routine COVID test.”

Neither Penn State nor Brown have indicated whether he tested positive for COVID-19, but the Big Ten requires cardiac screening and testing of those athletes who do before they can return to competition.

Brown was Penn State’s leading rusher in 2019 and was expected to be one of the best backs in the country in 2020. He ended last season with a career game, running for 202 yards and two touchdowns on 16 carries in a victory over Memphis in the Cotton Bowl.

Just days before the Big Ten started its abbreviated and delayed season last month, Penn State announced Brown would not be available to play because of a medical condition — though there was hope he might return.

“The pain of not being able to play the game I love hurts and I can’t explain how I’m feeling right now,” Brown wrote on social media. “However, I can walk away from the game knowing I truly gave my all at every practice, on every down and in the locker room everyday.”

Penn State is off to an 0-3 start and heading to Nebraska on Saturday.