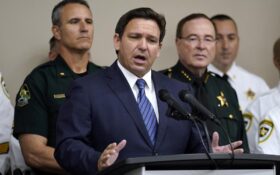 Florida Gov. Ron DeSantis may have won his first governor’s race by only 0.4, but he’s headed for easy re-election next month against his opponent, Democrat Charlie Crist.

DeSantis, a Republican, is not only leading the polls by a comfortable margin, but he’s also netting endorsements from surprising figures: like Crist’s own staff.

Crist himself served as governor of Florida from 2007 to 2011… as a Republican.

In 2010, Crist dropped his party registration. By 2017, he had registered with the Democrats, endorsed former President Barack Obama for re-election, and joined the U.S. House as a Democrat. He resigned from the House in August to focus on the governor’s race.

Still, Crist can’t even count on his former colleagues!

DeSantis was even endorsed by the former lieutenant governor, Crist’s running mate in the 2006 election.

“The undersigned represent former colleagues and staff of Charlie Crist. Together, we have known Charlie in virtually all phases of his career and public life,” the letter says.

“The choice this November could not be more clear: we unanimously endorse Governor Ron DeSantis for re-election.”

The signees avoided any criticism Crist, their former boss. Rather, they spoke more about DeSantis’ record.

“We stand with Governor De Santis because the stakes are too high,” the letter says.

“Governor DeSantis has delivered for Florida. He has led our state with courage and conviction. He has demonstrated his ability to lead us through difficult times.”

But on other occasions, LeMieux has bashed Crist for flip-flopping on important issues like abortion, firearms and tax policy.

“The Charlie Crist I knew idolized Ronald Reagan and embraced Reagan’s view of limited government,” LeMieux reportedly wrote in an op-ed from 2012.

“He was pro-life, pro-gun and vehemently anti-tax. He believed big government was the enemy of success, and that when government taxed it took ‘your money.'”

All in all, 37 of Crist’s former colleagues signed the letter endorsing DeSantis.

They’re following in the footsteps of Dave Kerner, a Democrat county commissioner who endorsed DeSantis last month in a scathing condemnation of Crist.