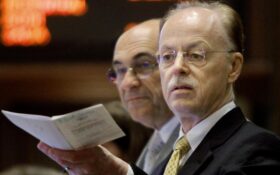 Timothy Mapes, 66, of Springfield, is charged with making false declarations before a grand jury and attempted obstruction of justice.

Mapes was one of Madigan’s closest allies, serving beside the Chicago Democrat as clerk of the House and executive director of the Democratic Party of Illinois, which Madigan chaired. He abruptly quit all three posts in 2018 after a female staff member accused him of making lewd comments and brushing aside reports of harassment.

Mapes could not be immediately reached for comment on the new charges Wednesday. However, in an emailed statement his attorneys, Andrew Porter and Katie Hill, said Mapes “testified truthfully in the grand jury.”

The indictment handed up by a special grand jury in Chicago states Mapes was subpoenaed to testify before the grand jury on Feb. 12, and that he was granted immunity by prosecutors on March 24 to testify. Under the immunity agreement, no testimony or evidence Mapes provided could be used against him in a criminal case unless he committed perjury, gave a false statement or otherwise failed to comply with the immunity order.

Mapes testified before the grand jury on March 31, according to the indictment. Prosecutors wanted to question Mapes about dealings between Madigan and a consultant. Asked multiple times about the consultant acting on Madigan’s behalf or carrying out work for the Chicago Democrat, Mapes denied knowledge of such a relationship.

In one exchange, Mapes was asked if he had reason to think the consultant was acting as an agent for Madigan, by doing work for him or carrying out assignments for him.

The indictment states Mapes made the statements even though he knew the consultant did work for Madigan and communicated messages on Madigan’s behalf. It says Mapes himself sometimes acted an an intermediary between Madigan and the consultant.

Madigan was the longest-serving legislative leader in U.S. history before he resigned his seat in February amid the corruption probe. He served in the Illinois House for 50 years and was first elected speaker in 1983. He held the position for all but two years of his remaining time in office. He also served as chairman of the Democratic Party of Illinois, a post he also resigned in February.

Madigan was implicated in the bribery scheme involving Commonwealth Edison in July. ComEd admitted it secured jobs, often requiring little or no work, and contracts for his associates from 2011 to 2019 for favorable treatment in regulations. ComEd agreed in August to pay $200 million.

Madigan has not been charged in the probe, and he has described himself as “the target of vicious attacks by people who sought to diminish my many achievements.”

A spokeswoman for Madigan didn’t immediately return a message Wednesday.

An independent investigation of harassment in Madigan’s office found an atmosphere of bullying and intimidation and concluded Mapes had too much authority.